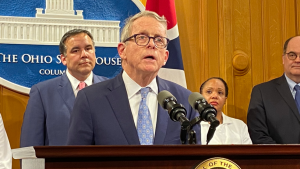 Governor DeWine announced today that he has directed Adjutant General John C. Harris Jr. to work with Ohio Department of Public Safety Director Tom Stickrath to set up enhanced procedures to ensure that members of the Ohio National Guard do not have ties to hate groups.

The announcement comes after a member of the Ohio National Guard was removed from a mission in Washington, D.C., after the FBI uncovered information that the individual expressed white supremacist ideology on the internet prior to the assignment.

“While I fully support everyone’s right to free speech, the men and women of our National Guard are sworn to protect all of us, regardless of race, ethnic background, or religion,” said Governor DeWine. “Our Ohio National Guard members are in a position of trust and authority during times of crisis, and anyone who displays malice toward specific groups of Americans has no place serving.”

The Ohio National Guard and Ohio Department of Public Safety are fully cooperating with the FBI investigation. The Guardsman has been suspended from all missions at this time, and following due process, it is highly likely that he will be permanently removed from the Ohio National Guard.