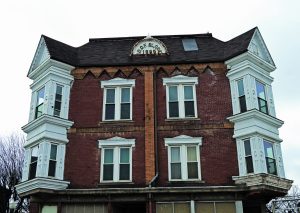 The Odd Fellows Building on the Square in Historic Downtown Caldwell, Ohio.

The Ohio History Connection, Ohio’s nominating authority to the National Register of Historic Places Program, notified local leaders that the application for the Downtown Caldwell Historic District Project has been approved by the U.S. Park Service.

“Just received notice that the Caldwell Historic District has been listed. Congratulations!” the email from Susan Tietz, national register and inventory manager for inventory and registration with The Ohio History Connection, said. Tietz previously shared that they want the community and the district’s property owners to understand the benefits of the program and that there is really no downside to this effort. There was some delay in the final approval processes due to the COVID-19 pandemic.

The district is in downtown Caldwell roughly bounded by Spruce, West, Plum, Bridge, and East Streets, including the Courthouse Square and surrounding commercial areas. The application features the area’s significance to the growth of Caldwell and to Noble County, as well as buildings of significance in their architectural merit. The original town plat is still evident through the street grid arranged around a central public square with the county courthouse serving as the focal point.

The district encompasses 61 late-nineteenth to mid-twentieth century historic resources that represent the settlement and commercial growth of Caldwell and contribute to the significance and integrity of the nominated historic district. There is also one previously listed resource; the Noble County Jail and Sheriff’s Office. The period of significance is 1858 to 1969 which represents the period of most significant commercial development.

The project was a dream of Jeff Minosky, a member of the Caldwell Village Council and of The Noble County Historical Society who assisted the project with up-front funding. OSU Extension Community Development Educator Gwynn Stewart, working with Minosky, applied for and secured a $12,000 Pipeline grant through the Ohio Development Services Agency to reimburse the costs of the research and application process paid for by the Noble County Historical Society.

“The leadership and commitment of The Noble County Historical Society to preserving Noble County’s cultural and historic treasures was critical to this effort,” Stewart said. “We look forward to coordinating a variety of promotional options for the Caldwell Downtown Historic District through Appalachian regional tourism efforts including the Appalachian Byway of Ohio that includes other downtown historic districts in McConnelsville and Nelsonville.”