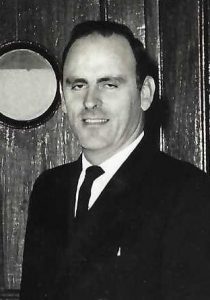 Albert Marcel Canu, age 96, of Caldwell, Ohio, died Monday, March 2, 2020, at Summit Acres Nursing Home in Caldwell. He was born November 24, 1923, in Dieppe, Normandie, France, son of the late Eugene and Marie Madeleine Bauchet Canu. He served as a U.S. Merchant Marine during World War II, and he worked as a sailor on commercial shipping vessels. Albert was a member of St. Stephen Catholic Church in Caldwell.

In addition to his parents, he is preceded in death by his wife, Simone Camille Burea Canu, who died August 7, 2017; a step-son, Samuel “Sam” Womack; a step-grandson, Sammy Womack; and a step-granddaughter, Serena Thomas.

Friends may call Saturday, March 7, 2020, from 10 – 11 a.m. at St. Stephen Catholic Church in Caldwell, where the funeral service will follow at 11a.m. with Rev. Fr. Wayne Morris as celebrant. Burial will follow at Pleasant Hill Cemetery. A veteran’s service will be conducted by the Noble County Veteran Service Organizations. McVay-Perkins Funeral Home, 416 East Street, Caldwell, is caring for the family. An online guestbook may be signed at www.mcvay-perkins.com