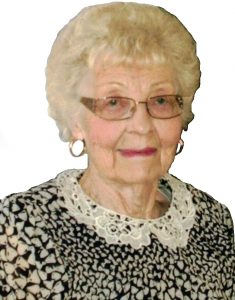 Mary Elizabeth (Watson) Bailey, 91 of Cumberland, was reunited in heaven with her husband, the love of her life on March 10, 2020 at the Beckett House in New Concord.

Mary was born January 18, 1929 in Muskingum County. She is the daughter of the late Cecil and Louise (Ward) Watson. She was a 1948 graduate of Cumberland High School and married her life partner Charles “Chuck” Bailey on July 3, 1948 in Covington KY. Together they had a dairy farm and later a beef farm.  She worked a few years at NCR in Cambridge and was the “Plad Stamp Girl” at Byesville A&P in the early 1960’s.  Mary was a member of the Cumberland United Methodist Church.  She was a wonderful Wife, Mother and Grandmother and will be deeply missed.  She loved yard sales, craft shows, working in her flowers, writing in her diary, sitting in her swing, and helping make 100’s of cookies especially ginger bread and sugar cookies and fabulous peach pies.

Those left to cherish her memory are her daughter, Sandy (Carl) Wickham of Cumberland and her son, Chuck Jr. (Jill) Bailey of Zanesville; her grandchildren, Craig Wickham, Drew (Tabitha) Wickham and Erin (Joe) Hirsch; her very cherished great grandchildren that lit her face with a smile, Jake, Kason, Klair and Joey; sister-in-law’s, Janet Watson and Patricia Watson; many dear nieces and nephews and cousins and so many wonderful neighbors, friends and caregivers at Beckett House and Buckeye Hospice.

Mary is preceded in death, in addition to her parents and step-mother, Icel (Pickenpaugh) Watson; by her loving husband of 65 years, Charles on December 27, 2013; her sister, Betty Watson; and her two brothers, Richard “Dick” Watson and Dana Watson.

Visitations will be 4 to 7 pm on Friday, March13, 2020 at the Farus Funeral Home, 343 W. Main Street, Cumberland.  Funeral services will be at the Funeral Home 11 am, on Saturday.  She will be laid to rest beside her husband in the Cumberland Cemetery.