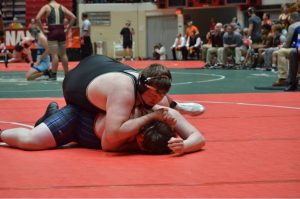 He feasted on plenty of “pancakes” on the gridiron, posted countless pins on the mat and punished a few baseballs in the batter’s box over the last four years, so it’s not surprising that it took a worldwide pandemic to derail Shenandoah High senior Easton Hitchens’ dream of standing on the podium at the Ohio High School Athletic Association State Wrestling Championships.

Poised for All-Ohio Division III status in wrestling after capturing OVAC and District championships during his final year wearing the singlet of the Zeps, Hitchens – like more than 600 other wrestlers not to mention countless still alive in the quest for state titles in girls/boys basketball and hockey – didn’t get that chance  when  the OHSAA announced Thursday that the winter sports tournaments for those sports, which were postponed indefinitely on March 12, had officially been cancelled due to the coronavirus (COVID-19) pandemic.

It is anticipated that schools will not be able to reopen for weeks, and possibly the remainder of the 2019-20 school year, preventing interscholastic athletics from taking place.

OHSAA Executive Director Jerry Snodgrass and his staff communicated with the schools that were still competing in those winter tournaments to announce the decision.

“We are just devastated that the tournaments cannot be completed,” said Snodgrass. “But our priority is the safety of our student-athletes, coaches, communities and officials. Governor Mike DeWine is asking all Ohioans to do everything they can to stop the spread of this virus. That request, along with our schools not being able to reopen for weeks, means that school sports cannot happen at this time. Even if our schools reopen this spring, it will be difficult to find facilities willing to host the tournaments. Most campuses are shut down until mid to late summer.

“We are already planning for ways that these student-athletes will be honored at next year’s state tournament,” said Snodgrass.

That verdict left Hitchens, his coach Jesse Wells and his fellow state qualifiers – freshman 120-pounder Drake Kanyuch and junior 113-pounder Alex Overly (an alternate) – with an “incomplete” finish to their season.

While disappointed for his senior captain, Coach Wells understood the decision but that didn’t make it any easier.

“Wrestling is a different animal,” he pointed out. “The longer this went on, the harder it was going to be because there were kids walking around 25 pounds over their weight class already, so it’s a tough situation for sure.”

Wells said “the call” came at the very last minute, but he sensed it much earlier.

“We were leaving school,” he recalled, “Our wrestlers were in the hall and loaded up (for the trip to Columbus when we got the call and it was really tough, but even prior to that we were just trying to get through each weekend.

“I hate this for all of them,” he said, referring to every wrestler in the state. “They all competed and worked hard to get there, and it just leaves a sinking feeling in your stomach.

“The reason kids play sports is to compete,” Wells noted, “and they got that taken away from them.

“Not just our wrestlers,” he added, “Meadowbrook had a great boys’ basketball team and Fort Frye had one of the best girls’ teams it has ever had.”

Telling his 285-pound “stud” – who finished his career with a fine 138-48 record – via the phone at school was difficult, to say the least, for Wells.

“When I called him and told him I got the email that it was going to be canceled, I told him he’ll always be my champ and he appreciated that,” said Wells, himself a two-time All-Ohio wrestler at SHS. “I told him that very few people have the luxury of going out on top which he did as a district champ, and that was awesome, and had a very good chance to place and earn All-Ohio.

“I also told him this won’t be last time life throws you a curve ball,” the coach added, “but he’s mature way beyond his years and he’s handled it well and we’re all super proud of him.

“Obviously, we’re disappointed for Drake and Alex, too,” he added, “but they have another shot and that’s why I hurt even ore for Easton.”

The “Big Fella” was, justifiably so, disappointed not to have the chance to achieve this goal, but as Coach Wells said, he took it like the leader he has become.

“One of my goals as a senior was to be an All-Ohio athlete in football, wrestling and baseball,” said Hitchens. “I was first team All-Ohio in football, but with the cancellation of the State Wrestling Tournament and baseball season being up in the air right now, this won’t happen.

“Although I have already decided to continue my football career at Mount Union,” he continued, “I wanted to gain these accolades in wrestling and baseball so I could be considered as one of the most accomplished athletes to ever go through Shenandoah High School. Ultimately, in the long run, these accolades will not affect the person that I will become.”

“It’s the end of the journey,” Hitchens said via Twitter. “Thank you to all my coaches, teammates, and family for helping over the past four years become not only a better wrestler, but a better person in general.

“Thank you to the Shenandoah faithful for all of the support,” he added. “I hope I made you all proud.”

Despite the disappointment of the situation, Hitchens was still able to inject a bit of humor into the situation with the following:

“I proclaim myself as the OHSAA Division III Heavy-Weight State Champion,” he proclaimed.

He may not have the hardware of a state champion, but he certainly is just that in the eyes of his family, coaches, teammates and the entirety of Zep Nation.