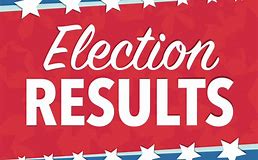 Remember, these results are not official, and more absentee ballots may arrive, and could change the results of races. Final results will be announced on May 13.