Team success can often lead to individual rewards such as all-star recognition and the like, and for three Shenandoah High volleyball players the success they achieved both collectively and individually has led to the chance to play the sport they love at the next level.

The trio of Raegan Flood, Whitney Dixon and Trysten Smith – key members of the Lady Zeps’ most successful volleyball team ever – will be bumping, setting and spiking in college. Flood and Dixon will stay in the area at nearby Muskingum University while Smith headed to Waynesburg University in western Pennsylvania.

Shenandoah enjoyed a tremendous season in the “swan song” of this year’s seniors – a 20-8 overall record that included a late-season 16-game winning streak; the OVAC Class 2A championship; OHSAA Division IV Sectional and District crowns and a Regional runner-up finish (losing to Newark Catholic in the finals).

“With our history-making season, it’s of course obvious that we had a very cohesive team of strong leaders,” said Shenandoah volleyball coach Megan Grywalski of not only this trio but fellow seniors Mya Stahl and Laura Doak. “Though I have not been a coach for very long, this was a remarkable group of seniors and one I know I will reference in years to come when setting goals for our future teams.

“The younger players on the team would agree that they were lucky to get to play and learn from this group as I was lucky to coach them,” she added. 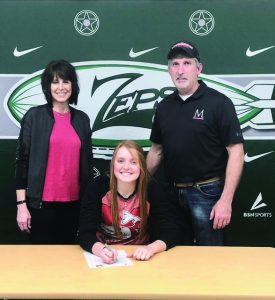 Shenandoah senior Raegan Flood will continue her academic and athletic careers at Muskingum Universty. Pictured with her are her parents, Sandy and Kurt Flood.

A 5-11 middle hitter, Flood she was a three-year letterwinner/starter.

“I moved Raegan to varsity as a sophomore,” recalled Grywalski. “She was always strong, but didn’t know how to use her strength correctly. She pulled it together as a junior and when she stepped on the court, players and coaches took notice of her.

“If the game was close at the end, they did not want Raegan at the net, but we did,” aid the SHS coach. “We knew that if we needed a kill, Raegan was the go to. She not only led in hitting and blocking stats, but she also did excellent passing and serving.

“She was a player who always pulled in younger players and made them feel equal,” added Grywalski. “Through all of her success, she remained level-headed and coachable.”

“Shenandoah has really blessed me with so much,” said Flood. “I cannot thank my teachers and coaches enough for all they have done to help shape me into the person I am today. Thanks to Jesse Wells, the weightlifting program at Shenandoah is unmatched and truly is a difference-maker when it comes to athletic success.

“Our volleyball team my senior year made history and there really isn’t much more I could ask for,” she continued. “We had an unforgettable tournament run and I made so many memories. I had the best coach and teammates a girl could ask for.

“I will never forget walking out of the locker room and entering the gym at our regional semis game,” Flood offered. “The energy our fans brought to that game was crazy. I remember walking into the gym, looking at Ryleigh (Sherman) and Tara (Pakes) and saying ‘this is insane.’ I knew with that kind of support and the energy we all had in the locker room that it was going to be a good game. When we came out on top with that five-set win and all of our fans went wild, I couldn’t hold back the tears. All of our success made me hungry for more, and I knew I wasn’t done playing.”

She was also a member of the 34-0 East Ohio Force club volleyball team that finished No. 1 in Ohio and No. 1 in the Region.

Flood was also a four-year letterwinner in basketball. As a senior, she earned honorable mention all-Ohio Division IV, first team all-OVAC Class 2A, second team all-District 12 and third team all-Eastern District while averaging 12.7 points and 10.1 rebounds per game. She also participated in softball and track.

“I am so excited to start this next chapter of my life playing volleyball for Muskingum University and majoring in psychology,” said Flood. “I chose to attend Muskingum because of the location and campus size, plus they have a very successful volleyball program!

“I am so excited to be a part of such an amazing group of hardworking people who love the game as much as I do,” she added.

The daughter of Kurt and Sandy Flood, “Reggie” plans to major in Psychology at Muskingum. 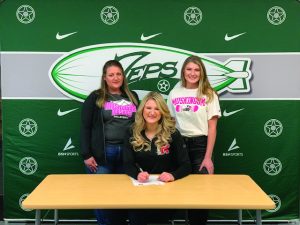 Shenandoah senior Whitney Dixon will continue her academic and athletic careers at Muskingum University. Pictured with her are her mother, Holly Dixon and her sister, Allison.

A 5-10 middle hitter, Dixon was a four-year letterwinner/starter for the Lady Zeps.

“Statistically, Whitney was toward the top all the way around,” said Grywalski. “She might not have led, but she came in top three in almost all stats.

“Like Raegan, I put a lot of responsibility on my middles this year,” she continued. “They were not only expected to lead at the net, but I banked on these two to serve tough and pass the ball as well and they both did a phenomenal job. When Raegan rotated to the back, I had Whitney to get up there and tally kills as well.”

“My career at Shenandoah has prepared me for my future in volleyball as well as life,” said Dixon. “There were some challenges, but when we worked together a lot was achieved!

“My fondest memory is the day we won regional semis,” she related. “There were so many people there supporting us. We gave it our all in those games and it was the most amazing feeling having everyone there believing in us. Playing with my teammates in that game was surreal.”

“I chose Muskingum because I love playing volleyball,” said Dixon. “I can finish school anytime, but Muskingum gives me a chance to do both. I get to play volleyball with some amazing girls and coaches while also continuing my education somewhere not too far from home.

“Also, attending Muskingum is special to me because it is my grandpa’s alma mater,” she added, referring to Dan Wesson, a 1978 Muskingum graduate who was a standout in football and wrestling. “I love the idea of continuing his legacy.”

The daughter of Holly Dixon, Whitney plans to major in Animal Science at Muskingum. 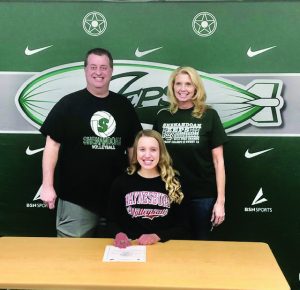 Shenandoah senior Trysten Smith will continue her academic and athletic careers at Waynesburg University. Pictured with her are her parents, Marc and Melissa Smith.

A 5-7 setter, Smith was a four-year starter/letterwinner at SHS.

“She led us in assists and serving stats three years in a row,” said Grywalski. “She is one of the hardest working athletes I have ever coached and probably the best setter Shenandoah has ever had.

“Through two knee surgeries, she pulled through and has always been an essential part of our team and our success,” she continued. “Trysten was not always the most verbal leader, but a leader to set the example. She’s mentally tough and always does everything without complaint.”

“Representing the Zeps in a volleyball uniform brought me more joy than anyone could imagine,” said Smith. “I got the opportunity to compete, work hard, and have fun on the court each and every day with my amazing team.

“Although I am proud of what I accomplished individually throughout my high school career, I am most proud of all that we accomplished as a team,” she continued. “With that being said, my favorite memory of Shenandoah High School volleyball is making history by going to the Regional Finals (Elite 8) with the most amazing team a girl could ask for. I will dearly miss suiting up for the Zeps on the volleyball court, but I am also excited for what lies ahead.

“I chose to attend Waynesburg for a couple of different reasons,” said Smith. “A big reason was that I received a full academic scholarship, meaning I only have to pay for my books each semester, while also getting the opportunity to continue playing the sport that I love most.

“In addition to that, the staff at Waynesburg and my future teammates instantly made me feel welcome when I stepped on campus for the first time,” she added. “I cannot wait to be a part of this family and see what the future has in store for me!”

The daughter of Marc and Melisa Smith, Trysten plans to major in Math Education at Waynesburg.