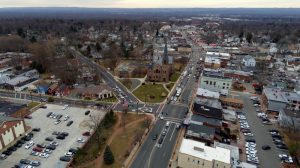 The May 18 meeting of the Caldwell Village Council was held online so that council members could observe required social distancing requirements and maximum number of people allowed at a meeting rules.

A number of points of business were discussed, including previously passed ordinance 2020-03, which in its original form approved the hiring of a part-time village administrator for the village of Caldwell. Last Monday, the ordinance was adjusted to allow for a full-time village administrator to be hired. The three reading rule was waived, because the matter had received a great deal of discussion at the March meeting. Mayor Misty Wells said that most towns have a full-time administrator, whose job it is to oversee on a day-to-day basis millions of dollars worth of projects for things such as sewer and water, street department, etc., and to supervise village employees. A village administrator is the only person who can supervise general fund and enterprise fund (water and sewer).

Mayor Wells said the position needs to be a full-time one not only so work can be done more efficiently in the village, but also to generate interest in the job in experienced professionals who will be qualified to perform the work as necessary. The vote was split and Wells was the tie breaker for hiring a full-time administrator.

The position will be advertised in the local paper and online.

In other business, Ordinance 2020-04 was passed regarding residents maintaining their properties in good order. Grass and weeds cannot exceed eight inches in height.

The village is currently surveying how vacant properties are being maintained, and action is being taken to clean or have them cleaned up. If the village has to step in and clean up a property, the property owner will be assessed a fee. This falls under already-existing village ordinances.

Deputy Sargent Robert Pointer reported that the Noble County Sheriff’s Office patrolled 115 hours in the village last month. He said there have been some issues in the North Street area, and deputies are patrolling the area more as a result.

Mayor Wells in her report said she is getting calls about stray cats becoming a problem in the village again.

In other business, Tyler Anderson, attending the meeting via telephone, said he is interested in leasing the former Rodney Rohrbaugh building on Railroad St. belonging to the village. He intends to put a business in the building working on trucks, tractors and trailers. After some discussion, council voted to lease the building which has been vacant for several years, and said they will need to advertise the building for lease, and Anderson is invited to place a bid.

Mayor Wells commented that a new business in the building would contribute income to the village which is much needed in light of the current pandemic.

Mayor Wells said she will discuss the request with the health department and will let McAfee know as soon as possible.

The annual village clean-up day, postponed from its original date at the end of May, has been rescheduled for June 26 and 27. No tires, paint or chemicals will be accepted.

The sidewalk matching program is happening again this year. The village will pay for four yards of concrete per property. Call the village for more details.

The village voted to hire summer helpers through Job and Family Services again this year. The positions will be ones such as weed eating and mowing in the cemetery only in which people can social distance.

The next meeting of Caldwell Village Council will take place on Monday, June 15.