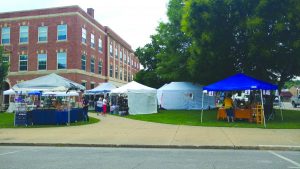 Art on the Square Director Trudy Martin announced with regret last week that due to concerns for the safety of vendors and festival-goers and the community at large, as well as rules about large gatherings still in effect, the 2020 Art of the Square, scheduled to take place just a few weeks from now, has been cancelled. Martin said the committee would like to thank all vendors who had already signed up, and that show fees will be fully refunded to them by check. She also thanked businesses who donated prize money, which she will also be refunding. It is Martin’s hope to see the 2021 Art on the Square festival take place next June.