Two Caldwell High athletes in the Class of 2020 will continue their academic and athletic careers at the next level this fall. 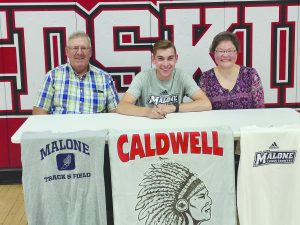 Caldwell High’s Mason Ackley, center, will continue his academic and athletic career at Malone University. Joining Mason for the announcement were Rick and Angela Ackley.

Mason Ackley will be attending Malone University where he will continue his track and cross-country career. Ackley led the Caldwell cross country team last fall, earning All-Ohio honors with a 27th place finish in the OHSAA State Meet. He won the 1A/2A race at the OVAC Cal Pokas Cross Country Championships and won the OHSAA East District Division III race. He then earned his way to state with a 10th place finish at the OHSAA D-III Regional Meet.

Ackley is looking forward to heading to Canton this fall.

“I chose Malone because it reminds me a lot of Caldwell,” he said. “The way the team is close, the coaches are great, and it’s a smaller school. I just feel like I could fit in and make memories with everyone there.

“I have learned so much about running from Dugan (Hill),” Ackley said of his coach. “He is a great coach and I will miss running for him.

“My favorite memory from being a Running Redskin is earning All-Ohio honors this past fall at the state cross country meet,” he added. “To finish my high school cross career by meeting that goal will always be special. I have enjoyed spending time with my teammates and making the best memories with such great people.”

Coach Hill feels that Malone will be a good place for Ackley.

“Malone will be a good fit for Mason,” he said. “Their team is a family just like ours. The team lives together in the dorms, eats together, studies together. Mason will feel at home there.

“We will miss Mason,” he admitted. “He has been an asset to our program and his leadership will be missed.” 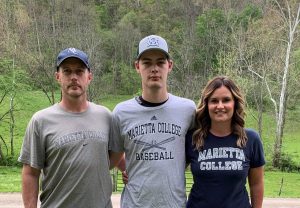 He was a standout pitcher who also played shortstop and third base during his high school career. His post-season honors include three-time All PVC, two-time All OVAC, two-time first team  All-District, and one-time third team All-District.

Hesson had 170 career strikeouts. During his sophomore and junior seasons, he had a combined 9-9 record with one save. He struck out 118 batters in 115 1/3 innings and had an ERA of 1.58. Stats for his freshman season were not available.

Hesson has spent his summers playing for the Beverly-Lowell Legion baseball team, where he helped them to claim the state and district titles and get to within one game of playing in the American Legion Baseball World Series last summer. His pitching record with B-L is 21-5. During his time with the Beverly-Lowell team, they won three District championships, one State title, one District title, and one District Runner-Up.

Hesson is looking forward to playing close to home.

“I chose Marietta because it is close to home and I know the campus relatively well,” he said. “I really like the small town feel of the campus as well as the academic and athletic programs.