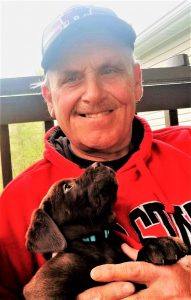 George A. Morgareidge, age 61, of Caldwell, Ohio, died unexpectedly Wednesday, June 3, 2020, at his home. He was born December 14, 1958, in Cambridge, son of Margaret A. Ickes Morgareidge of Caldwell and the late George P. Morgareidge, who died July 23, 2011. He was a 1978 graduate of Caldwell High School and Mid-East Career Center in Buffalo, where he was enrolled in the HVAC program. He graduated in 1989 from Mid-East Career Center in Zanesville where he was enrolled in the truck driving program. He was a truck driver for 30 years, working most recently for ECM Energy Services in Cambridge. He was a member of First Baptist Church in Caldwell. George was a fan of Cincinnati Reds and Cleveland Indians baseball. He enjoyed caring for his yard and attending family activities, especially cookouts. He was devoted to his family: his wife, his mom, children, grandchildren, and his dogs.

In addition to his father, he is preceded in death by his favorite dog, Josie.

Friends may call Sunday, June 7, 2020, from 4-8 p.m. at McVay-Perkins Funeral Home, 416 East Street, Caldwell, where the funeral service will be observed Monday, June 8 at 11a.m. with Ken Perkins officiating. Burial will follow at Halley’s Ridge Cemetery. For public safety, guests are encouraged to wear masks and practice social distancing. Memorial contributions may be made to PAWS, Inc. at www.noblepawsinc.com or at P.O. Box 4, Caldwell, Ohio 43724. An online guestbook may be signed at www.mcvay-perkins.com