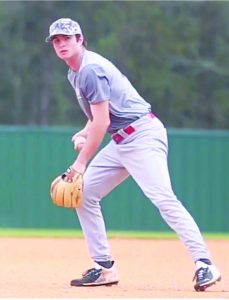 Guernsey County native Colt Keith was selected in the fifth round of the recent Major League Baseball Draft by the Detroit Tigers. He played shortstop in high school, but plans on trying third base in the minors.

He picked up his first bat and threw his first pitch in Guernsey County.

Now this “Colt” is a member of the Detroit Tigers’ organization.

Colt Keith – who spent his first eight years living just outside of Byesville where he developed an early affinity for the game of baseball – got “the call” on Thursday when he was selected with the first pick of the fifth round (132nd overall) in the Major League Baseball Draft by the Tigers.

While the 18-year old Keith’s journey began here, it also included stops in Utah and Arizona in part to increase his baseball exposure before he landed in Mississippi.

That’s where he would shine brightly as a four-year standout at Biloxi High School as a shortstop and relief pitcher. During his career, he hit an impressive .448 with 15 home runs and 32 doubles; an on-base percentage of .568 and a slugging percentage of .822. His senior season – like many others – was cut short or those numbers would no doubt have been even higher.

Among his many accolades in Mississippi was being named the winner of the prestigious Gatorade Player of the Year (encompassing all sports) for 2018-19. That year, as a junior, he batted .527 with eight home runs, 12 doubles and 49 RBI while posting a 6-0 pitching record with a 1.47 ERA in 16 appearances.

That honor puts Keith in some pretty select company as the list of previous Gatorade winners in Mississippi includes the likes of Peyton Manning, Derek Jeter, Abby Wambach and Karl-Anthony Towns.

Due in part to the impact of the coronavirus (COVID-19) pandemic, this year’s MLB Draft was reduced from the usual 40 rounds (more than 1,200 players) to just five rounds (160 players) being selected. Keith was the 87th ranked prospect by MLB Pipeline and in some circles, he was expected to go as high as the second round so slipping to the fifth round resulted in some fingernail-biting for the talented youngster.

“It was probably the most stressful day of my life. Actually, it was the most stressful,” Keith told the Sun Herald newspaper in Gulfport, Mississippi.“I fell far past where I thought I’d be and I shed a few tears from getting worried and stressed, but the whole mood switched (when he was drafted) and everybody was hyped up and happy.”

Keith told WXXV News 25 in Gulfport that he’ll use the fact that he dropped to round five as extra motivation.

“I’d rather be an underdog any day of the week,” he said. “I was always the guy that had to work for what I got and I think it’s better that way. It’s more satisfying that way and I think that’s one of the reasons I’m a success right now because that’s the thing that drive behind me and makes me get better.

“Being a fifth rounder….it does put an extra chip on my shoulder and for me, I have something to prove now,” he added.

Keith – projected as a power-hitting third baseman but whose versatility as a shortstop and pitcher makes him even more valuable – had already committed to Arizona State University, but it appears he’ll sign with the Tigers and begin his professional career.

“As soon as they gave us the (contract) numbers we wanted, I didn’t care who the team was or the circumstances,” said Keith after getting ‘the call’ from Detroit General Manager Al Avila. “It’s always been my goal and a dream to make it to the big leagues.”

According to WXXV News 25, Keith was offered what is usually considered third round money ranging between $570-857,000.

With the minor league season likely to be canceled this summer, it’s uncertain what the immediate future holds, but Keith could possibly be sent to Tigers’ spring training facility in Lakeland, Florida.

Colt’s athletic roots stem back to his parents.

His father, Troy Keith – a 1989 graduate of Meadowbrook High School – was a standout wrestler who won the 130-pound title at the OVAC Wrestling Tournament as a senior and was the outstanding wrestler in the OVAC vs. Western Pennsylvania All-Star Match who later spent several years as the Colts’ head wrestling coach. His mother, Mary (Shugert) – a 1993 Buckeye Trail High School graduate – was a multi-sport athlete who earned second team all-OVAC honors in basketball as well as being her class valedictorian.

If Colt gets to the Majors some day, no doubt there’ll be a few Tigers’ fans cropping up in Guernsey County and the surrounding area despite the abundance of Cleveland Indians’ fans here.

That group will certainly include his cousin, Troy Pontius, a graduate of Buckeye Trail High School current at Marietta College.

“It’s exciting,” said Pontius via Twitter. “He’s been looking forward to the draft since last summer.

“I’m just excited to have a reason to watch more baseball games and to have a relative connected to a professional sport,” Pontius continued. “I can’t believe I’m going to be a Detroit Tigers’ fan in the future. Yikes, it hurts a little but man, I’m happy he’s close to Ohio!”