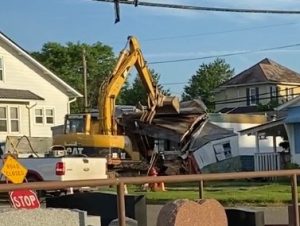 Mayor Misty Wells said that having hit the six month mark of her term as mayor, she thinks things are going well. She is pleased with the way the village clean-up is going, and mentioned a few specific areas that are being focused on, such as the removal of some dead shrubs in the cemetery; trash around the village; junk cars in the village; and last week the removal from the village of a trailer that was allegedly a drug house in bad condition.

She would like to see one big project earmarked each year. Some ideas are to build a dog park in the village and to clean-up Sunset Pond.

The Mayor mentioned the idea of going to e-bills to save the village postage.

She said the city hall building was recently power washed, and that the former Rodney Rohrbaugh building will be power washed. It is being advertised for rent.

In his monthly report to the village council, Sgt. Bob Pointer said there have been some juvenile issues in the village that the sheriff’s office is looking into. There has been vandalism involving spray paint, and there has been damage done up at the Caldwell Lake.

There was discussion of mounting cameras at Caldwell Lake to catch vandals in the act.

In other business, council approved four yards of concrete for a sidewalk for the church at East and Locust Streets. The church is doing their parking lot and it makes sense to do both.

The Sewer Separation Project is stalled while waiting for risers; they should arrive this week, and the project will reportedly be able to move forward.