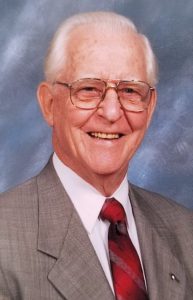 Charles W. Patten, age 97, of Caldwell, Ohio, died Sunday, June 21, 2020, at his home. He was born August 31, 1922, in Noble County, son of the late William Mahlon and Louanna Louise Langel Patten. Charlie attended Dexter City High School and he was a United States Army veteran who was a sergeant with the 104th Division, Company B, 329th Engineers. Charlie owned and operated Patten’s Appliance in Caldwell for 47 years. He attended Twin Rivers Baptist Church in Marietta and he was a longtime member of Gideons International. He was also a member of Caldwell VFW Post #4721. Charlie met his wife Martha through Youth for Christ, of which they were both members. In 1950, they sang with several hundred others in a choir for the Billy Graham Crusade in Minneapolis, Minnesota.

In addition to his parents, he is preceded in death by his wife, Martha Kathryn Sanford Patten, whom he married June 7, 1947, and who died November 19, 2016; one daughter, Peggy Louellen Patten; a son-in-law, James P. Edmisten: three sisters, Marjorie Patten, Emalene Benson, and Mary Lou Radcliff; and one brother, Dean Patten.

Friends may call Wednesday, June 24, 2020, from 5-8 p.m. at McVay-Perkins Funeral Home, 416 East Street, Caldwell, and Thursday, June 25 from 9 a.m.-11 a.m. at Twin Rivers Baptist Church, 110 DAV Road, Whipple, where the funeral service will follow visitation at 11 a.m. with Pastor Jeff Baumer officiating. A veteran’s graveside service will follow at Dudley Cemetery conducted by the Noble County Veteran Service Organizations. For public safety, guests are encouraged to wear masks and practice social distancing at all gatherings. An online guestbook may be signed at www.mcvay-perkins.com