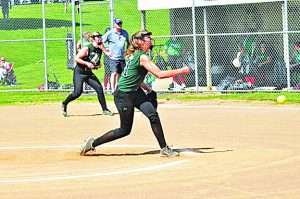 The 28th Don Coss Tournament – a staple of the area during the Fourth of July weekend – took place despite the many cancellations of events due to the coronavirus (COVID-19) pandemic.

After the first three days of action (10 games featuring Cambridge, Marietta, St. Clairsville, Parkersburg and Findlay), the Cambridge 19U team had posted 1-3 record.

The tournament was scheduled to wrap up Sunday with the five teams competing in a single-elimination format event. Cambridge, however, would need three wins to claim the title.

On Friday, Cambridge opened the tournament with a split, edging Parkersburg by a 6-5 count and then dropping a 4-1 decision in eight innings to St. Clairsville.

Against Parkersburg, Clark Jennings (Caldwell) had a triple, two singles and an RBI; Dylan Beaver had three singles and three RBI; Austin Fox and Logan Fox both had a double and single; and Trent Valentine had two singles. 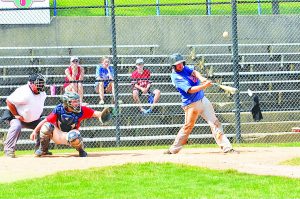 Caldwell’s Clark Jennings connects for a hit during a Cambridge 19U game in the 28th Annual Don Coss Tournament at Cambridge City Park.

On Saturday, Cambridge lost to Marietta, 6-2, and fell to Findlay, 9-8, in eight innings.

Against Findlay, Peyton Neff led the offense with a double and two singles. Logan Fox had a homer and three RBI; Kaden Whaley had two singles and an RBI; Trent Valentine Had two singles; and Jennings and Blade Barclay each had a single and an RBI.

Last Sunday, Cambridge dropped a 3-1 decision to Jefferson County in the semifinals of the Coshocton Tournament, halting a 10-game winning streak.

Cambridge managed just three hits, including a double and single by Barclay.

The trio of Lane Howell, Jensen Helmuth and Logan Fox combined for six strikeouts on the mound, with Howell taking the loss.

***
Shenandoah earned a split in the Cambridge Summer Softball League, blanking Barnesville by a 9-0 score and falling to Cambridge, 7-3. The Lady Zeps are now 3-3-1.

Due to a positive COVID-19 test within the district, Caldwell’s softball team was unable to compete in the Cambridge Summer Softball League and the junior high baseball team will play its games on the road until at least July 14th.

The 10th Annual Caldwell Varsity Shootout which had tentatively been scheduled for July 11th has also been canceled.