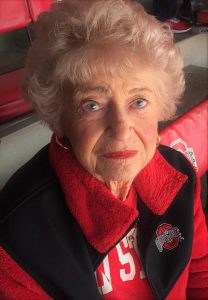 Mary Jane Yontz Anderson, age 91, of Caldwell, Ohio, died Sunday, July 12, 2020, at Dublin Methodist Hospital in Dublin, Ohio. She was born April 17, 1929, in Marietta, daughter of the late Erwin “Judd” and Lura Gray Farley. Mary Jane was a 1947 graduate of Caldwell High School, and she was a 1951 graduate of The Ohio State University, where she earned a Bachelor of Science degree in Education. She was a retired teacher, having taught in Columbus City Schools and Wooster City Schools, and she served as a substitute teacher for Caldwell Exempted Village Schools. Along with her husband Joe, they took over the Farley Insurance Agency, which was renamed Yontz-Anderson Insurance Agency. Following Joe’s passing, she continued to operate the company until 1986. Mary Jane was a member of the Caldwell United Methodist Church and attended the Caldwell Presbyterian Church. She was a former member of the Caldwell Village Council and served on its Tree Committee. She was active in the Downtown Renovation and was passionate about keeping the village of Caldwell beautiful. She was a big supporter of her hometown. She was also a member of the Noble County Historical Society and the Noble County Chamber of Commerce. Mary Jane was an avid and skilled golfer. She was a huge fan of Big Ten Basketball and the Ohio State Buckeyes. She loved her flowers, and she loved donuts and sweet rolls. She enjoyed decorating for every holiday, and she loved her family and friends.

In addition to her parents, she is preceded in death by her first husband, Joseph H. Yontz, who died July 1, 1972; her second husband, Lowell E. “Duke” Anderson, who died March 31, 2018; and one brother, Richard “Dick” Farley.

Friends may call Thursday, July 16, 2020, from 4-8PM at McVay-Perkins Funeral Home, 416 East Street, Caldwell. The family will not be present during calling hours. A private family service will be observed and a celebration of life service will take place at a later time. Burial will be in Olive Cemetery. For public safety, guests are encouraged to wear a mask and practice social distancing. Friends are encouraged to share memories, pictures, and messages of support at www.mcvay-perkins.com