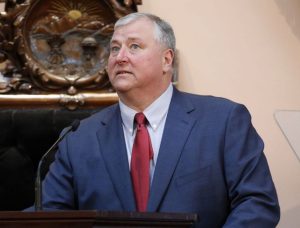 Ohio House of Representatives Speaker Larry Householder, (R), who represents Perry, Coshocton and part of Licking counties, was arrested this morning by the FBI at his Perry County farm. He, along with four others, were arrested in connection with a $60 million bribery scheme, allegedly linked to last year’s controversial bailout of two Ohio nuclear power plants, while cutting funds for renewable energy and energy efficiency.

The federal charges allege a long-term bribery campaign to build support for Householder’s bid to become House Speaker and then pass the nuclear bailout law with his help.

Also charged was Generation Now, which is described as “a 501(c)(4) entity secretly controlled by Householder.” Prosecutors report that an unnamed company paid Generation Now nearly $3 million in 2017 and 2018. This appears to be connected to the bailout.

Householder became speaker in January of 2019, and passed the bailout in July of that year.  It went into effect last October.

Governor Mike DeWine released a statement today calling for Householder’s resignation, saying that while everyone is presumed innocent until proven guilty, the nature of the charges will prevent Householder from leading the House.

For an excellent, in depth article, see an article by Laurel Wamsley NPR.