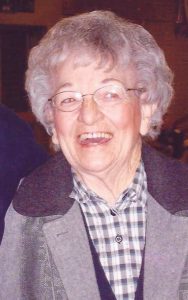 Mildred S. “Midge” Lori Henderson, age 90, of Sunset Hills in Caldwell, Ohio, died Sunday, July 26, 2020, at Cambridge Health and Rehabilitation Center. She was born August 4, 1929, in Fulda, daughter of the late Beda and Rose Hill. She was employed as an inspector for Cleveland Graphite Bronze, and along with her late husband Clem, she owned and operated the Oasis Bar and Grill in Belle Valley for many years. Midge will be remembered as a hard and diligent worker. She enjoyed knitting and gardening, and she loved going to her sons’ and grandchildren’s sporting events. She was a member of St. Stephen Catholic Church in Caldwell.

At Midge’s request, there will be no service at this time. McVay-Perkins Funeral Home, 416 East Street, Caldwell, is caring for the family. Friends are encouraged to share memories, pictures, and messages of support at www.mcvay-perkins.com