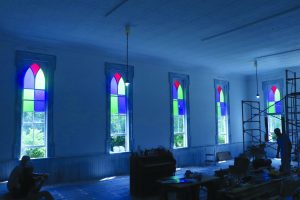 Special to The Journal 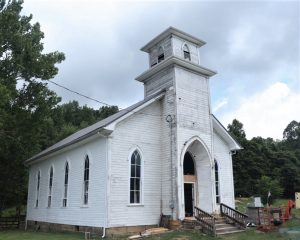 Several years ago when Michael and Janet Muffet secured the deed to Saint John’s Church in Wayne Township, Noble County, their son, Trey, enthusiastically climbed the rickety bell tower ladder. At the top, he discovered the original bell and rope. He reattached the bell and the Muffet grandchildren rang the bell for the first time in years. At that happening, the Muffet family knew they were challenged with preserving this circa 1881 historic community landmark. The bell should continue to toll for everyone. They met with family members and friends who discussed possibilities and sketched designs for the planned renewal. Then in October, 2019, Bobbi Cassidy and Nick Weber, who own property nearby, approached Janet about their wedding plans. They asked to be married in the church on October 31, 2020. That request got the ball rolling, and this past March, cleanup and construction began.  Rather than wedding gifts, the engaged couple asked their wedding guests to donate money for the church restoration. The Muffets set up an account, “Saint John’s Church Restoration,” at Citizens National Bank in Quaker City, and that became seed money for the project. Nick Weber, a licensed electrician, donated all the electrical work.

Since then, the roof has been replaced; the badly leaning walls have been straightened, drywalled and painted; the hardwood flooring has been exposed, and is ready for sanding and finishing; and the outside original siding has been repaired, sanded and primed. Janet researched and found metal ceiling tiles that are the exact pattern of the original tiles, thus the ceiling and crown molding have been restored and painted. Currently, a specialty crew is repairing the bell tower. (And the rickety ladder!)

Mick Muffet and his two-man crew consisting of Jim Swallie and JackPierce of Barnesville, provided most of the labor for the construction. They removed the old wooden windows and painstakingly detached the stained glass. They then repaired the sashes and frames with the help of Emanuel Shrock of Belmont County. Bill Bird of Zanesville recut the old stained glass and fitted new glass where needed. Custom Glass of Cambridge sealed the glass into the frames. The restored windows have now been installed, with only the one over the door left to mount.

As the construction nears completion, there is still much to be done. In the plan is a white vinyl fence and gate to define the church and township cemetery, and a separate building to house restrooms, a dressing room, and small kitchen. Those wishing to dedicate a window in memory or in honor of a loved one, or wishing to make a donation or obtain information on the project, may contact Janet Muffet at 740-238-0938.

A dedication service is planned for 2 p.m. on Sunday, Oct. 4. All are welcome.