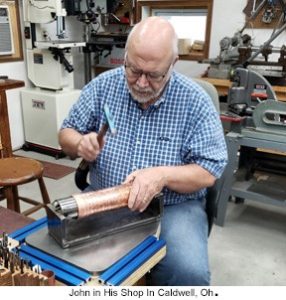 John Monk, a coppersmith from Caldwell, was recently juried into the Roycrofters-At-Large Association, Inc. (RALA) as an artisan in metal. The RALA is a non-profit organization that “has been entrusted with educating, fostering and inspiring through the continual evolution of the Arts and Crafts Movement.”

Monk joins the ranks of approximately 70 artisans and master artisans currently recognized by RALA.  Artisans work in one or more media including: metal; glass; leather; painting, printing, & pen & ink; paper & book arts; fabric & fiber; clay; sculpture; and wood. Each year, all artisans are re-juried to insure they are maintaining the highest level of quality in their work and are progressing toward master status. Jurying also ensures the integrity of the Roycrofters At Large Association brand. As an artisan, Monk may add the Roycrofter Renaissance touchmark to his work.

Monk began metalsmithing at an early age making tin ware using 1800’s tools collected by his father. A Pennsylvania native, he attended The Ohio State University to earn a PhD in education. In 1990 he married Caldwell native Ann Denney.

In the 1990’s, he volunteered at the Ohio Village tin shop, Ohio Historical Society’s historical re-enactment site in Columbus, where he received formal training in tinsmithing from Bruce Panic, the fulltime tinsmith there. Previously, his metalworking had been largely self-taught.

In 2010, Monk was introduced to Coppersmithing at the John C. Campbell folk school by RALA master coppersmith Robert Trout.  He enjoyed with working in copper and set the goal of someday becoming a Roycroft Artisan himself. Encourage and guided by Trout and other RALA master artisans, that goal became a reality for Monk this year.

Monk has taken additional classes in coppersmithing from other teachers, but remained close to Trout until his death earlier this year.

Following in Trout’s footsteps, Monk began teaching at the John C. Campbell Folk School last year, and plans to continue to do so.

He and his wife relocated to Caldwell in 2011 to be close to her father, Bob Denney. He retired in 2018 from DHL/Excel where he was a computer programmer.

Monks two mentors, Panic and Trout, were instrumental in helping him achieve his goals. He would like to do the same for others. “I strive to mentor others learning the craft of coppersmithing – passing on what was shard with me,” he said.

To learn more about the Roycrofters At Large Association, visit https://ralaweb.com.  You will find Monk’s work on his website, https://luminesque.com.   He is also a member of the Riverside Artists Gallery in Marietta. His work may be viewed and purchased at the Gallery at 219 2nd St. in Marietta. or online through his website.