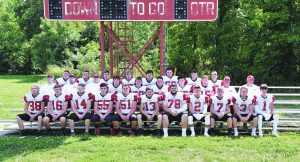 The Caldwell Redskins are a senior laden team and return the bulk of their starters from last year, losing only one starter to graduation, so Coach Grant Gaydos is looking for his team to improve on last year’s 2-8 record.

“Last year was a disappointing season,” said Gaydos “We only had one senior and played a lot of young guys in ‘skill’ positions, including a freshman at quarterback. We dropped a lot of close games, but we learned and have improved over the off-season.”

“With the weight room time limited because of Covid, our guys have had to do a lot of the off-season stuff on their own,” offered Gaydos. “They have been working hard and we are excited to get the season going.”

Coach Gaydos is pleased with the team chemistry this year.

“Our team attitude has changed for the better this season,” he said. “Our older guys have grown up and matured and their positive attitude and discipline has filtered down to the younger guys.”

The only starter lost to graduation is Bradley Michael, who started at offensive guard and defensive end. He earned several post season honors including special mention all-Ohio Division VII first team all-East District and first team all-OVAC Class 2A, and he was selected for BACF All-Star Game which like most other athletic endeavors, was postponed.

Offensively, the Redskins have changed some things. They are looking to utilize the passing game more this season as well as continuing their strong running game.

Sophomore Braxton Dudley (5-9, 166) will return at the quarterback position. Last year, he completed 61 passes for 526 yards and two touchdowns. He also ran the ball 130 times for 366 yards and six touchdowns.

“Braxton was put into situations last year that you don’t like to see a freshman in.” said Gaydos. “He is in there because he is the best at that position. He had a lot of learning to do and still does, but last year’s experience will be significant for him.”

Moore led the Redskins in rushing last year, carrying the ball 168 times for 668 yards and four touchdowns. Sayre ran for 264 yards on 30 carries and two touchdowns.

Coach Gaydos likes the toughness of his backfield.

“Caden and Marshal are tough runners,” he related. “We are looking for Caden to have a career season this year with the changes we have made in our offense.”

Whyatt Parks led the team in receptions last season with 23 for 225 yards, followed by Piskula with 20 for 139 yards and a touchdown.

Sophomore running back Ethan Carpenter (5-7, 160) is out for the season due to surgery.

Coach Gaydos is excited about the defense this year.

“As a coaching staff, we are most excited to watch our defense this season as they are going to fly around and make plays,” he said. “We have a lot of guys who are headhunters with a great football mentality. That is something that you can’t necessarily teach them…they just have it.”

The Redskins will run a 4-4 as their base, but will have multiple looks

Caden Moore and Dawlson Moore will lead the defense as the inside linebackers along with Wehr from his tackle position. Caden Moore led the defense last year with 97 tackles.

“Having Dawlson back this year will be big for us. He is a game changer.” offered Gaydos.

Joining Wehr at tackle will be Clark, while Croucher and Langley look to line up at the ends. Outside linebackers will be Piskula and Hill, with Ackley and Sayre also being in the rotation. The secondary will consist of Dudley at safety while Leasure and Parks are at the corners.

Caldwell’s revised schedule has them playing many of the same teams, including traveling to Shenandoah earlier than normal – Week 2 – on September 4. New to the schedule are at Berne Union on September 25 and at Strasburg on October 16.

All teams in Ohio will qualify for the playoffs this season and that game will be held October 9.

Gaydos enters his fifth season at the helm with a 14-26 record. Returning to the coaching staff are Jason Rucker and Jensen Croucher while joining the staff this year will be Caldwell alum Bryan Sawyer, who is moving up from coaching the junior high and Chance Rucker, who is coaching for the first time after completing a stellar collegiate career at West Liberty University.

Caldwell opens the season hosting Eastern on Friday at the Noble County Fairgrounds. Kickoff is scheduled for 7 p.m.