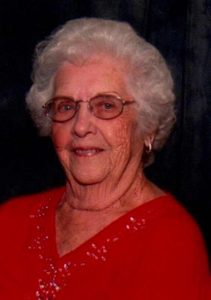 During WWII she was a “Rosie the Riverter,” working to help build war supplies in the nation’s time of need. Mary retired as a cook for the Women’s Home in Marietta in 1986 and had worked in the bookstore at Marietta College for many years. She was a member of Lower Salem Methodist Church, Order of Eastern Star #584, Lebanon, where she was a Past Matron and was President of the Past Matron’s and Presidents of Masterson Chapter. Mary enjoyed painting pottery, which she did at Marietta Pottery, and was also known for her beautiful handwriting.

She is survived by her daughter, Kathy Snider (Raymond) of Marietta; son, Joe Lucas (Pat) of Marietta; daughter in law, Laura Lucas of Lowell; six grandchildren, 16 great grandchildren; sister, Mildred Franks of Barberton; and many nieces and nephews.

Due to current COVID-19 conditions, private family graveside services will take place at Masterton Cemetery in Lebanon, Ohio. There will be no visitation. Mary’s family would like to thank Dr. Krupadev and his staff for their care and compassion over the years and to the staff at Summit Acres Senior Apartments for always going above and beyond.

Donations may be directed in her memory to the Lower Salem United Methodist Church. The Marietta Chapel of Cawley & Peoples Funeral Home is honored to serve Mary’s family and offers online condolences and many other resources by visiting their website, CawleyandPeoples.com .