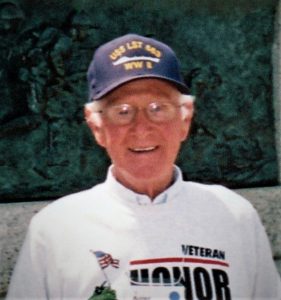 McKinley H. Morris age 95, of Summerfield, Ohio passed away Wednesday, August 26, 2020 at his daughter’s home in New Albany, Ohio. He was born August 7, 1925 in Summerfield a son of the late Jerome and Mabel Carpenter Morris.

McKinley Served and protected his country in the U.S. Navy in World War II. He served on the LST-663 in the Battles of Palau, Leyte, Luzon, and Okinawa. He was a member of the Summerfield Church of Christ. He was a foreman for the Ohio Bridge Company in Cambridge, Ohio for over 44 years. He farmed for many years and always enjoyed traveling with his wife Norma. McKinley could often be found on his front porch or tinkering outside his home and always enjoyed visiting with neighbors and friends.

In addition to his parents, he is preceded in death by his wife Norma Carpenter Morris, whom he married August 16, 1947 and who passed February 15, 2019; four sisters, Lola Martin, Maxine Shroyer, Martha Stephens, and Grace Hannahs; two brothers, Robert J. Morris and Racey Morris.

The family will receive friends for a funeral service Saturday, August 29, 2020 at 11 a.m. in the Chandler Funeral Home Chapel, with Evangelist Jimmie Moore officiating. Burial will follow in Eastern Cemetery in Summerfield with military graveside honors conducted by the Noble County Veteran Service Organizations.

Chandler Funeral Home, 609 West Street, Caldwell, OH 43724 has been entrusted to care for the family. Please join us in remembering McKinley by visiting his memorial at www.ChandlerFuneralHome.net