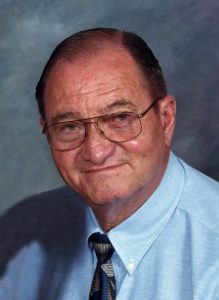 Wayne E. Bettinger age 85, of Caldwell, Ohio passed away Friday, August 28, 2020 at the Summit Acres Skilled Nursing & Rehab in Caldwell. He was born June 8, 1935 in Middleburg, Ohio the only son of the late Walter B. and Wilma H. Gildow Bettinger.

He served and protected his country in the U.S. Army National Guard. He worked for the B&N Coal Company and went on to retire from Central Ohio Coal Company. He was a member of the United Mine Workers – Local # 1604 and Sharon Lodge #136 F&AM. He was a member of the Caldwell Church of Christ, where he also served as a Deacon. He enjoyed mowing his grass and could often be found sitting on his porch.

In addition to his parents, he is preceded in death by his wife Bessie C. Lincicome Bettinger whom he married June 21, 1958 and who passed April 20, 2014, and a son Steve Bettinger.

The family will receive friends for visitation Monday, August 31, 2020 from 4 – 8 p.m. with a Masonic service held at 7:30 p.m. at the Chandler Funeral Home, 609 West Street, Caldwell, OH 43724. A funeral service will be held Tuesday, September 1, 2020 at 11 a.m. in the Chandler Funeral Home Chapel, with Jim Garrett officiating. Burial will follow in Dudley Cemetery, with military graveside honors conducted by the Noble County Veteran Service Organizations. Please join us in remembering Wayne by visiting his memorial at www.ChandlerFuneralHome.net