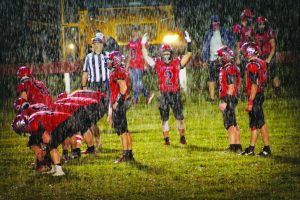 Caldwell High’s Whyatt Parks (2) gestures to the crowd as Redskins line up in the pouring rain in the final minute of Friday’s win against Eastern. Photo Credit: Stacey Parks.

The rain could not cool off the Caldwell Redskins’ running game as they hosted the Eastern Eagles on Friday, with the Redskins coming out on top by a 34-20 score at the Noble County Fairgrounds.

Head Coach Grant Gaydos was thrilled to get the opening night victory. “It is always nice to start the season with the ‘W,’” he said. “I was proud of the way our guys fought back after giving up the early touchdown and then the long return for a touchdown after we scored.

“In past years, we would not have mentally recovered from that,” he added. “The guys really showed their maturity tonight.”

The Caldwell defense stopped Eastern on its first drive when Braxton Dudley intercepted a pass by Eagles’ quarterback Conner Ridenour on the 24 yard-line, but on the Redskins’ first play from scrimmage, Dudley fumbled the ball and the ball was covered by Jayden Evans on the 14.

Eastern quickly scored on three straight carries by Steve Fitzgerald, who scored on a two-yard run. The point-after kick missed and the Eagles led, 6-0, with 8:15 left in the first quarter.

The teams then exchanged punts for three possessions before the Caldwell defense stepped up and stopped Eastern on a fourth and nine on the 45.

Caden Moore then broke loose, running the ball five times in the seven-play drive, highlighted by a 28-yard jaunt. Dudley punched the ball into the end zone from five yards out with 4:37 left in the half and although the PAT kick was no good, the game was tied at 6-6.

Brandon Piskula’s kickoff was taken at the 25 by Blake Newland, who took it all the way back for a 75-yard TD return. The Eagles went for the two-point conversion and Fitzgerald pulled in a pass from Ridenour to give Eastern a 14-6 lead with 4:25 left before halftime.

Caldwell had a big play of its own on the next drive after Colby Langley gathered in the kickoff at the 34.

Two plays later, Dudley sprinted 58 yards for his second TD of the quarter and Dudley hit Piskula for the two-point conversion and the game was tied at 14-14 with 3:19 left in the second quarter.

Caldwell came out of halftime hot, just needing two plays to score. Marshal Sayre returned the kickoff to the 46-yard line and Caden Moore then put the Redskins in Eagles’ territory with a 13-yard run before Dudley finished the drive with a 41-yard touchdown. The kick was no good and the Redskins led 20-14 with 11:00 left in the third round.

The CHS defense held strong and the hosts got the ball back on the 34. The Caldwell offense once again marched down the field, just needing four plays to score.

The Eagles could not stop Caden Moore as he ran the ball three times, the first two for 31 and 16 yards, before he punched it in from 10 yards out for his first touchdown of the game. The two-point conversion failed and the Redskins extended their lead to 26-14 with 8:22 left in the stanza.

After exchanging punts, Eastern took possession on its 19-yard line and  put together an eight-play drive featuring an 11-yard Ridenour pass to Isaiah Reed; a 15-yard Ridenour pass to Fitzgerald and an 18-yard run by Fitzgerald. Ridenour then called his own number and scored the touchdown from 10 yards out. The point-after attempt failed, but the Eagles closed the gap to 26-20 with 12 seconds left in the third quarter.

The Redskins then started to run down the clock, with Moore carrying the ball six straight times, including a 21-yard ramble. Dudley finished the drive, getting the final yard for his fourth touchdown of the game. Dudley also ran in the two-point conversion to put the Redskins up 34-20 with 7:27 left.

Eastern got the ball at the 31-yard line and the Eagles used 11 plays to drive the ball to the Caldwell 35, including a 12-yard run by Newland and a 10-yard pass from Ridenour to Preston Thorla. With fourth and three on the 35, Caldwell linebacker Dawlson Moore stepped up and stopped Newland at the line of scrimmage to give the Redskins the ball back with four minutes left.

“We really came back and played well.” Coach Gaydos said. “Our running game worked tonight and they just couldn’t stop Caden and Braxton. Defensively and on special teams, we gave up a few big plays that cost us, so we will need to work on that. Our guys were aggressive and Dawlson really stepped up with some big tackles to help us clinch the win.”

Caldwell outgained Eastern, totaliing 424 total yards with 386 of those on the ground. Caden Moore led the ground attack with 18 carries for 173 yards and one touchdown while Dudley had 13 carries for 159 yards and four TDs. Dudley completed two passes for 18 yards, with the longest being for 22 yards to VanFossen. Defensively, the Redskins were led by Dawlson Moore with nine tackles and Caden Moore with eight, while Dudley had an interception.

Eastern had 360 total yards, 158 on the ground and 54 through the air. Ridenour completed seven passes for 54 yards. His leading receiver was Newland with two grabs for nine yards. Ridenour also led the ground attack with five carries for 68 yards and a TD and Fitzgerald had nine carries for 49 yards and a TD. Defensively, the Eagles were led by Evans with six tackles and a fumble recovery.

The ‘Skins visit rival Shenandoah on Friday, with kickoff set for 7 p.m.