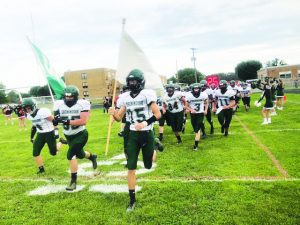 The Shenandoah Zeps take the field prior to the start of Friday’s season opener against Belpre. The Zeps came out swinging and rolled to a 48-7 victory in a game delayed 54 minutes in the second quarter due to lightning in the area. Photo credit: Justin Denius

On the heels of an All-Ohio season, Shenandoah High senior Briar Portman took it to another level in the Zeps’ lightning-delayed season opener at Belpre.

Portman made the most of limited carries in the Zeps’ 48-7 runaway victory, rushing for a whopping 265 yards and four touchdowns on just 14 carries. Portman scored on runs of 10, 65, 63 and 73 yards in a start-to-finish dominating effort by the Zeps who outgained the Golden Eagles by a 524-142 margin.

“Another strange night for sure, but we wouldn’t expect anything less,” said Shenandoah coach Jesse Wells. “It was exciting for our kids as it’s been a long time since November but we finally got that bad taste out of our mouths.”

Wells got the expected game one ups and downs from his team, but he lauded the performance of Portman and the Zeps’ defense in particular.

“We showed some flashes where we can be pretty good,” Wells offered, “but we also showed we need more game time and there are some things we need to clean up.

“We know what he’s capable of,” he said of Portman. “We started him both ways, but we pulled him on defense because when he’s fresh, he’s tough to deal with.

“Defensively, we knew it would be interesting because they had replaced their head coach a week before the game (veteran Mike DeVol stepped aside with Lance Binegar taking over). We weren’t sure what to expect so we were planning on making in-game adjustments and our kids handled that okay until we started subbing in young guys.”

Both teams fumbled on their first possession, with junior Julius Kirk recovering for the Zeps who then drove 68 yards in eight plays, with Portman getting the TD on a 10-yard run.

Seniors QB Dayton Hill teamed with senior Cade Denius for the two-point conversion, and the Zeps were off an running with an 8-0 lead at the 5:21 mark of the first quarter.

Portman’s next score came from long distance – a 65-yard scamper with 1:06 left in the opening round. He was stopped short on the PAT run, but SHS was now up by 14-0.

After sophomore Ethan Carpenter notched the first of his two interceptions, the Zeps went airborne for the next TD with senior transfer Robbie Cool turning a short pass from Hill into a 50-yard score.

The two-point pass was picked off, but Shenandoah’s lead widened to 20-0 with 11:49 left in the first half.

After a three-and-out by Belpre, the Hill-to-Cool combination worked again, this time for a 47-yard six-pointer. Portman added the conversion run to built the Zeps’ lead to 28-0 at the 9:48 mark of the second period.

Portman scored his third TD with another first-down explosion, stiff-arming a defender and heading off to the races for a 63-yard tally.

Just after a failed two-point pass, leaving the score at 34-0 with 7:48 to go in the half, lightning showed up.

Following a 54-minute stoppage, a turnover swap got things started, with the Zeps losing the ball via a fumble and the Eagles on Carpenter’s second “pick” near the end of the first half.

Belpre finally broke through at the outset of the second half when senior Cody Daugherty tallied on a 30-yard run, with senior Tyce Church kicking the extra-point to cut the Zeps’ lead to 34-7 with 9:59 remaining in the third quarter.

The Zeps fumbled the ball away for a third time on their next series, but the defense stopped Belpre at the SHS 21.

Hoping to get the “running clock” going again, Coach Wells returned his starters to the game and it paid off quickly when Portman took a pitch-out on the first snap and sprinted 73 yards to paydirt.

Sophomore Jacob Crum kicked the PAT to put the Zeps on top, 41-7, with 3:53 on the third period clock.

After a mid-fourth quarter interception by Denius, Shenandoah tallied once more with freshman Sam Townsend carrying for 25 and 29 yards before going 23 yards for a TD. Crum’s point-after kick closed it out with 3:18 left.

While Portman’s night stole the show, Hill finished 8-of-10 passing for 185 yards including five catches for 65 yards by Denius and three for 99 by Cool.

The Zeps had 15 first downs and six penalties for 70 yards.

Belpre’s total yardage included 109 rushing and 33 passing. Daugherty finished with 60 yards on the ground and five catches for 36 yards and Conner Baker had 40 yards rushing while the QB tandem of senior Walker Feick and Baker hit 6-of-18 passes with three INTs.

–The 54-minute delay didn’t even come close to the longest of the evening. The Oak Hill at St. Clairsville game was stopped after just 19 seconds of action, delayed more than four hours before resuming and finally ended at 1:18 a.m.! Oh yea, Oak Hill had a three and a half hour bus ride home after its 31-19 loss.

–“Social Distancing” and mask wearing were evident throughout the stadium, with few, if any instances of non-compliance.

–This week’s “Noble County Super Bowl” will be live streamed by Kaleb Graham Productions (kgp.tv/live), and fans unable to attend due to the COVID-19 restrictions are invited to purchase the broadcast which will begin at 6:30 p.m. Friday.