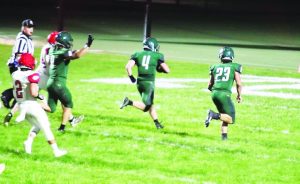 The 57th edition of the Noble County Super Bowl played out on the scoreboard exactly as the last two games had gone, with host Shenandoah emerging with a hard-fought Senior Night 14-6 victory over rival Caldwell on Friday.

The Zeps and Redskins had combined for 82 points in opening victories – Shenandoah defeating Belpre by a 48-7 score and Caldwell downing Eastern, 34-20 – but this game belonged mostly to the defenses along with an abundance of penalties.

Shenandoah’s fourth straight win (the last three by identical 14-6 scores) in the spirited rivalry which dates back to 1964 evens the series at 28-28 with one game ending in a tie.

“Any time you can get a win during Fair Week, it’s a good win,” said Shenandoah coach Jesse Wells, “especially with it being the rivalry game because many of the kids have other responsibilities, too.

“There was a lot of emotion when we finally got to play,” he continued, referring to his team’s 15 penalties for a whopping 158 yards, “but make no bones about it, we’ve got to get better in that area. We can’t keep putting ourselves in a hole by committing unnecessary penalties.

“The fact that we won playing as undisciplined as we did showed we have the ability to be a good team,” Wells added.

An interception by Caldwell senior Whyatt Parks halted Shenandoah’s opening possession and the Redskins were stopped on a fourth-down attempt at the Zeps’ 39 yard line on the ensuing possession.

A short Shenandoah punt gave Caldwell good field position at the 45, but another fourth-down stop – this one on a blitz by senior Cade Denius who met Caldwell senior Caden Moore head-on.

After an exchange of fumbles, with sophomore Colby Langly recovering for the ‘Skins and Denius for the Zeps, Shenandoah produced the game’s first score with less than two minutes remaining in the first half.

The big play came on a fourth-and 17 at the Caldwell 28-yard line, with senior QB Dayton Hill teaming with sophomore back Tyce DeVolld for a 27-yard pickup to the one, with DeVolld using second and third effort to drag Redskin defenders near the goal line.

Senior back Briar Portman – who had four touchdowns last week – got the payoff from there and Hill teamed with Tyce DeVolld for a successful two-point conversion, giving the hosts an 8-0 lead with 1:57 left in the second quarter.

Consecutive 15-yard penalties against Shenandoah and a 12-yard gainer by Caldwell sophomore QB Braxton Dudley had the visitors knocking on the door at the SHS 15.

An eight-yard gain by Dudley advanced the ball to the seven, but he lost eight on the next play and then a fumble covered by Shenandoah senior Preston Mackie after an 11-yard loss thwarted the scoring bid.

Caldwell’s defense forced a three-and-out by the Zeps, and the ‘Skins put together a 75-yard scoring drive aided by 48 yards in penalties by the Zeps.

Dudley completed three short passes along the way and got the payoff on a one-yard push across the goal line. The two-point try failed, leaving Shenandoah on top, 8-6, with 2:43 remaining in the third period.

The Zeps responded quickly, with Hill teaming with senior Robbie Cool for a17-yard gainer which led to the game’s biggest play – a 53-yard Hill-to-Denius touchdown connection.

The PAT run was stopped, but the Zeps’ lead was 14-6 with 42 seconds left in round three.

Caldwell had one final chance, moving from its 20-yard line to midfield, but a big 17-yard QB sack by Portman and a delay-of-game penalty were too much to overcome despite a pair of 10-yard runs by Dudley, turning the ball over to Shenandoah which converted a fourth-and-three in the final minute to seal the outcome.

Shenandoah’s Wells lauded the play of his defense, with Denius in particular shining brightly.

“Their backs are dynamic football players and keeping them in check was good,” said Wells. “Our goal is to limit the plays over 20 yards and I don’t think they had any, and we also won the turnover battle.”

Caldwell’s Grant Gaydos also credited his defense for its performance.

“Our defense played lights out,” said Gaydos. “We gave up two lucky plays all night where we just missed making the play.

“Offensively, we made too many mental mistakes and shot ourselves in the foot too many times with negative yardage plays,” he continued, also pointing to its seven penalties for 70 yards in walk-offs.

“I’m very proud of our team for their effort,” Gaydos added, “and especially for playing ‘above the line’ which is a term we use to playing the game with class and avoiding any personal fouls.”

Shenandoah (2-0) finished with 230 total yards, with 153 through the air and 77 on the ground. Hill completed 11-of-16 passes with one interception, with Denius landing five for 64 yards while Tyce DeVolld caught three for 51 stripes and Cool had two for 36. Portman managed just 85 yards on 19 rushing attempts.

–There was a nice-sized turnout at the Courthouse Square in Caldwell to view the live stream broadcast of the game by Kaleb Graham Productions (kgp.tv), with the set-up there thanks to the efforts of Nalin Bateman and the Shenandoah Wrestling Boosters with support from the Noble County Health Department, Noble County Commissioners and the Noble County Sheriff’s Office.

–It was certainly a good week for Coach Wells as he and his wife, Alaina, welcomed their third child, Kane, into the world last Monday.

–Both teams play at home Friday – Shenandoah taking on Cambridge (1-1) and Caldwell facing Fort Frye (2-0). Kickoff is set for 7 p.m. at both sites.