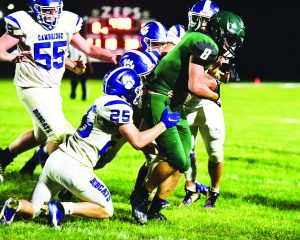 Three first half interceptions – including two of the “pick six” variety” – dug a deep hole for Shenandoah High in its first-ever clash with Cambridge, and the Bobcats rode a big first half to a 35-8 victory over the Zeps on Friday.

“Cambridge is a big school with physical, hard-nosed kids,” said Shenandoah coach Jesse Wells, whose team lost for the first time in three outings, “and for whatever reason, we seem to be intimidated by that. When we step out of our comfort zone, we don’t typically respond well.

“We’re struggling to block big, physical fronts and we missed open receivers too many times,” he continued. “We just didn’t give ourselves a chance to win.”

On a positive note, Wells pointed out that his team didn’t throw in the towel at halftime despite the big deficit.

“We lost the first half 35-0 and we were able to win the second half with their starters still in there,” he noted.

Cambridge – which bounced back from last week’s 41-10 loss to New Philadelphia – jumped out to a 21-0 lead in the first quarter.

The Bobcats’ first tally came on a 67-yard drive which featured a 13-yard pass from sophomore QB Caden Moore to junior back Kaden Kenworthy and a 19-yard scamper by Moore.

Senior back Logan Mobelini, who topped the 100-yard mark for the second straight game, broke free for a 22-yard touchdown run for the game’s first points, with junior Andrew Fillippis adding the point-after kick to put Cambridge on top, 7-0, with 7:07 remaining in the first quarter.

The ‘Cats made it 14-0 on their next possession, taking over at the 43-yard line after stopping the Zeps on downs.

A 12-yard run by Moore got the series going and an 18-yard pass from Moore to senior tight end Justin Bartlett got the ball down to the one. After a two-yard loss on a mishandled snap, Kenworthy went in standing up for a three-yard TD and Fillippis again nailed the conversion for a two-score CHS lead at the 3:40 mark of the opening period.

The Zeps lost junior tackle Alden House to a broken fibula on their next series, which ended with senior Kaden Whaley recording an interception at midfield.

The ‘Cats were forced to punt, with Shenandoah starting from its 14-yard line, and that’s where Bartlett – an All-Ohio first team defensive end – read a short backfield pass perfectly, picked it off and rambled 10 yards to paydirt.

Fillippis’ PAT widened the gap to 21-0 with 56 seconds left in round one.

Early in the second quarter, Cambridge got another big defensive play when junior Levin Polasky matched Bartlett with a “pick six”, his covering 45 yards.

Another Fillippis extra-point boot had the visitors in total command, 28-0, with 10 minutes remaining in the first half.

Cambridge forced a three-and-out and went back to work, covering 52 yards behind Moore, who carried three times for 24 yards and completed three passes for 41, with the six-pointer on a 10-yard toss to sophomore Owen Feldner.

Fillippis made it five-for-5 and the lead ballooned to 35-0 with 5:46 left in the second period.

The 35-point margin brought the OHSAA “running clock” rule into play in the third quarter, with Cambridge taking five minutes before punting and then Shenandoah using the rest of the time to finally break through. 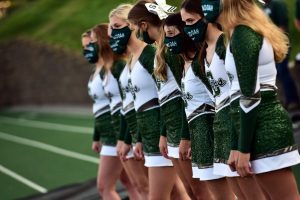 Van Fleet then hit Tyce DeVolld for the two-point conversion, cutting the gap to 35-8 with one quarter to go.

Injuries played a role as well, as not only did the Zeps lose House, but QBs Dayton Hill and Tanner DeVolld were both injured – Hill hurting his throwing shoulder last week and DeVolld reinjuring his ankle during the game.

“We can’t control injuries,” said Wells. “We always take about how small schools can’t absorb them even with as many kids as we have.”

Wells credited Van Fleet for stepping into the QB role and turning in a solid effort.

“We just need our quarterback to run the offense,” he said. “We don’t need anything spectacular and he (Van Fleet) did nice job stepping in.”

Penalties favored the Zeps this time, with Cambridge guilty of 15 infractions for 130 yards while Shenandoah had five for 42 yards.

“For the time in the history of football, we’re in a situation where playing tough teams and taking a loss doesn’t affect anything,” he pointed out, “so if this game exposed some things we need to do better, that’s a good thing.”

The Zeps look to bounce back Friday at Barnesville (2-1), with kickoff at Shamrock Stadium set for 7 p.m. The ‘Rocks are coming off  a 38-10 victory against Edison.