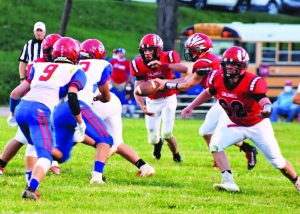 “We didn’t get off the bus in the first half.” he said. “They are the best football team we are going to see all year, so kudos to those guys.

“I am proud of the way we played in the second half,” Gaydos continued. “We made a few adjustments at halftime both offensively and defensively and that certainly helped. Something just lit a fire under our guys, I don’t know if it was the score on the board at halftime or what. We actually came out and played the second half.”

Fort Frye got on the scoreboard on its first possession of the evening as the Cadets took over the ball on the 48-yard line after a Skylar VanFossen punt.

The big play of the four-play drive was a 45-yard pass from Ian Ellis to Jaymison Baker, with Whyatt Parks making the tackle at the one-yard line. After a five-yard penalty on the Cadets, Owen Brown punched it into the end zone from six yards out. After another penalty on the extra-point, Ellis’ pass attempt to Brown fell short and Fort Frye led 6-0 with 7:15 left in the quarter.

Fort Frye then forced a fumble on the next Caldwell possession to get the ball back on the 12-yard line.

A penalty again pushed the Cadets back and Brian Adkins quickly scored from 22 yards out. The passing attempt for the points after failed again and the Cadets led 12-0 with 4:58 left in the first period.

Caldwell’s Marshal Sayre took the ensuing kickoff at the five-yard line and was quickly dropped. Braxton Dudley took the first snap and dropped back to pass, but Fort Frye sent its entire defensive gropu and forced Dudley to get rid of the ball from the end zone. An intentional grounding penalty was called as there were no receivers in the vicinity of the pass and the Cadets were awarded a safety, making the score 14-0 with 4:49 remaining in the first.

The Cadets got the ball on the 38-yard line after the ensuing free kick, and this time it took them nine plays to get to the end zone.

An 18-yard pass from Ellis to Brown and a 10-yard run by Brown were the big plays of the drive. Collin Welsh ran the ball in from the five-yard line and the PAT kick was no good, making it 20-0 with 11:56 left in the second quarter.

After an exchange of punts, Fort Frye put together an eight-play scoring drive, with a 22-yard pass from Ellis to Thomas Lenhart going in for the score. Ellis completed a 10-yard pass to Adkins and Brown had an 11-yard run to highlight the drive. The extra-point kick failed again, and with 1:12 left before halftime, the Cadets led by 26-0.

The Cadets’ Nick Hart intercepted a Dudley pass at the 36 on the next possession, but time ran out and Fort Frye went into the half with the 26-point lead.

The Redskins’ defense stepped up in the second half, ending the first Cadet drive of the half with a Joel Ackley fumble recovery.

Caldwell put together a couple first downs on a 14-yard run by Dudley and a 16-yard run by Sayre, but the drive stalled, and Dudley was intercepted in the end zone on a fourth-and-five pass.

The Redskins’ defense held strong again and forced the Cadets to punt. Ellis bobbled the snap, enabling Caldwell’s TJ Wehr to burst through the line and block the kick to give the ‘Skins the ball on the Fort Frye 25, them their best field position of the night.

Short runs by Caden Moore, Sayre and Dudley gave Caldwell a first down at the 15, but a sideline penalty pushed the ball back to the 30-yard line and the Cadets’ defense stepped up and shut down the Caldwell threat.

Neither team could move the ball for the rest of the game, leaving FF with a 26-0 victory.

The Redskins had 126 total yards, including 60 on the ground and 27 through the air. Dudley was 7-of-11 passing for 27 yards and two interceptions. His favorite target of the night was Parks with four grabs for 10 yards. Dudley also led the rushing attack with eight carries for 27 yards.

Defensively, the ‘Skins (1-2) were led by Jonah Croucher with nine tackles followed by Piskula and Caden Moore with eight each. Wehr had a punt block and Ackley had a fumble recovery.

Fort Frye (3-0) had 350 total yards, rushing for 179 and passing for 155. Ellis completed 12-of-13 passes for 155 yards. The leading receivers were Baker with three catches for 60 yards and Adkins with four receptions for 33 yards. Adkins led the ground attack with eight carries for 71 yards and a touchdown. Welsh carried the ball 12 times for 36 yards and a touchdown and Brown had six totes for 39 yards.

The Redskins travel to Woodsfield to face Monroe Central on Friday. The Seminoles (2-1) are coming off a 24-8 loss to the River Pilots.