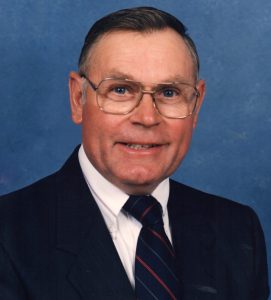 Vernon Ray Schott, 85, passed away peacefully September 10 on the family farm in Stark County near Bolivar. He was born near Fulda in Noble County, Ohio in January, 1935.  Vernon was the youngest son of the late William B. Schott and Louvina Schafer Schott.

He graduated from Caldwell High School in 1953. Later, he enlisted in the US Army during the Korean War.  He was stationed at Fort Monmouth in New Jersey, and at Schofield Barracks, Oahu, Hawaii, never seeing combat.

Upon returning to Ohio, he married Rosemary Crock of Caldwell on June 27, 1959.

Before the wedding, Vernon accepted an electrical position at Goodyear Aerospace in Akron. Shortly after the wedding, they moved to Stark County. In 1974, he joined Republic Steel in Massillon in the electrical maintenance department.  He retired in 1998.

In addition, the couple started crop and cattle farming near Bolivar in 1959 where he would spend the remainder of his life.

Vernon was very Christian man devoted to his family and faith. Whether it was visiting family, friends, and the infirmed, or sharing vegetables from his garden, he liked to reach out to others.

Vernon believed in an off-farm vacation each year.  He was the first member of the extended family to visit the Schaadt/Schott ancestral village of Urweiler (St. Wendel), Saarland, Germany in 1998.

Final resting place is at St. Clements Cemetery in Navarre.