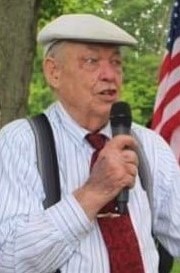 Zedrick J. Clark, age 86, of Senecaville, Ohio, died Wednesday, September 16, 2020, at Genesis Hospital in Zanesville. He was born October 17, 1933, in Noble County, son of the late Little Zedrick and Rosa Belle Bates Clark. He was a 1952 graduate of Sarahsville High School, and he was a United States Army veteran, having served in France as a member of the Honor Guard. He owned and operated Clark Auto Sales in Buffalo and Byesville, and he was the owner of Derwent Auction House for 17 years. He was the most recent mayor of the village of Senecaville, and he attended the Senecaville United Methodist Church and was a charter member of the Buffalo Post #8040, VFW. Zedrick loved cars and he was a founding member of the Noble Country Cruzers. He restored dozens of classic cars over the years. He also enjoyed restoring and fixing furniture.

In addition to his parents, he is preceded in death by his sisters, Opal I. Leasure and Mary LuCinda Anderson; and his brothers, John Jacob Clark, Delbert B. Clark, and William c. Clark.

Surviving are his wife, L. Kay Heddleson Clark, whom he married in 1957; his children, Jon R. Clark of Buffalo, Lisa L. (Richard) Bradford of Caldwell, and Zedrick Allen Clark of Berlin; his siblings, James R. (Nancy) Clark  and Rosa Belle King, all of Caldwell, and Joseph E. (Nancy) Clark of Pleasant City; a sister-in-law, Mary Ann Clark of Belle Vallley; 5 grandchildren; 4 great-grandchildren; many nieces and nephews; and his lap dog, Lucky.

A veteran’s graveside service will be observed Saturday, September 19, 2020, at 1p.m. at Senecaville Cemetery. The family will host a celebration of life service at a later time. Memorial contributions may be made to the Noble County Cruzers, c/o Kathleen Keylor, 44698, Bronze Heights Lane, Caldwell, Ohio 43724. McVay-Perkins Funeral Home, 416 East Street, Caldwell, is caring for the family. An online guestbook may be signed at www.mcvay-perkins.com.