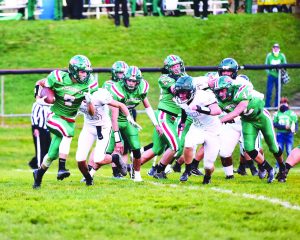 That was the word of the night for the Shenandoah Zeps as repeated mistakes played a big role in a 22-8 loss to Barnesville in Friday’s clash at Shamrock Stadium.

Shenandoah turned the football over four times and continued to hurt itself with penalties, resulting in a second straight loss that dropped the Zeps to 2-2 on the season.

“We continue to do the same things over and over again that have proven to not be successful,” offered veteran Shenandoah coach Jesse Wells. “We practice things all week and then get in the games and don’t execute them.

“There probably wasn’t one drive in the first half that was penalty free,” he continued. “We were fortunate to only be down 7-0 and then we come out and fumble the ball on our first two possessions of the third quarter.

Barnesville had been on the short end three years in a row against Shenandoah, but the Shamrocks weren’t going to let it happen again and turned in a stellar defensive effort in makine sure it didn’t.

“Just an outstanding defensive performance,” said Barnesville coach Blake Allen, whose team improved to 3-1. “(Shenandoah senior back Briar) Portman killed us last year and we stressed all week that we had to swarm to the ball, and we were all over the place on defense tonight.”

“Those guys have had our number the last three years so our seniors really wanted this one,” Allen said of the win over the Zeps.

After forcing a Shenandoah punt at the outset, Barnesville’s first possession ended in an interception by the Zeps’ Baylor Wentworth, but the ‘Rocks forced another punt and took over at their 15-yard line.

BHS went to work in the ground with senior Gage Hannahs getting the call five times early including runs of 14 and 20 yards; fullback Jake Boulet busting through for 12; and then senior Cameron Woods taking over with the final five carries including a two-yard touchdown run to cap a 14-play, 85-yard drive.

Carpenter drilled through point-after kick to give the hosts a 7-0 lead at the 11:26 mark of the second quarter.

That score held up at halftime as a late push by the Zeps ended with an end zone “pick” by Bliss.

Carpenter recovered a Shenandoah fumble at the the 22-yard line four minutes into the second half and the ‘Rocks quickly took advantage when Woods raced 17 yards to paydirt.

Another successful PAT boot by Carpenter extended Barnesville’s lead to 14-0 with 6:38 remaining in the third quarter.

Two played later, the Zeps coughed the ball up again and it was Bliss pouncing on the ball for the ‘Rocks.

This time, Barnesville used four pass completions by sophomore C.J. Hannahs – the biggest a 27-yarder to senior A. J. Detling and the capper a 19-yard screen to Bliss for the six-pointer.

C.J. Hannahs hit junior Chase Conner with the two-point pass to widen the gap to 22-0 with 2:32 left in round three.

Shenandoah (2-2) averted a shutout with 22 seconds left on a 22-yard TD connection from senior QB Dayton Hill to sophomore back Tyce DeVolld, with Hill running for the bonus markers.

Injuries also continue to make the sledding tough for the Zeps.

“We start out with our third string quarterback (sophomore Nathan Van Fleet) and he gets a concussion,” said Coach Wells. “Injuries are obviously detrimental to what we’re trying to do because you start shuffling the deck and you’re scratching and clawing with your horses on the sideline.”

Barnesville – which now leads the all-time series with Shenandoah 23-11 – finished with 221 total yards, including 155 rushing and 66 passing. Gage Hannahs carries 19 times for 90 yards and Woods had 55 on 12 attempts. C.J. Hannahs completed 6-of-8 passes with one interception and Bliss caught four for 38 yards.

Shenandoah managed 121 net yards, with 77 through the air and just 44 on the ground. Senior Cade Denius tallied 27 rushing yards on seven carries while Portman had 25 on six tries. The trio of Van Fleet, Hill and Portman connected on 11-of-22 passes with two INTs.

A plethora of penalties resulted in 107 yards on 15 flags by the ‘Rocks and 11 infractions for 97 yards by the Zeps.

“We’re trying to formulate a plan to get everyone going in the same direction,” said Coach Wells. “We’re not going to dig a hole in the sand and put our heads in it. That’s not how we operate.”

Shenandoah will celebrate Homecoming 2020 on Friday when Johnstown Northridge comes to Sarahsville for a 7 p.m. kickoff.