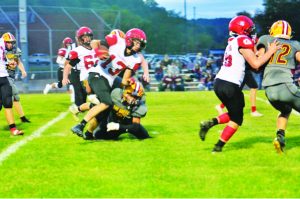 The Caldwell Redskins made the long trip to Sugar Grove to take on unbeaten Berne Union on Friday, and the ‘Skins pulled out an exciting last-second 18-13 victory.

“We heard a lot coming in that they haven’t played anyone,” said an elated Caldwell coach Grant Gaydos following his team’s third win of the season, “but that’s a very good football team.

“I am proud of how our guys stuck it out in the second half and made the plays when it really mattered,” he added.

The first half was dominated by the defenses of both teams, with neither able to finish a drive. Both teams had to punt on their first drive and then they both had defensive stands on fourth down to end the next series.

The third Rockets’ possession ended on an interception by Tate Leasure and Caldwell’s last drive of the half was also ended when Braxton Dudley was intercepted by Brae Friesner as time ran out and the teams went into the locker room tied, 0-0.

Caldwell did have several big plays in the half including a 27-yard pass from Dudley to Whyatt Parks and a 16-yard run by Dudley.

“We had a lot of opportunities lost in the first half.” Coach Gaydos stated. “Drives stalled and we couldn’t finish which let them hang around.”

The second half told a different tale as Caldwell got the opening kickoff at the 20 and took just five plays to put the first points on the board.

Marshal Sayre had the big play as he burst through the line and sprinted 47 yards before he was brought down at the BU three-yard line. Dudley then called his number for a two-yard touchdown, and although the two-point conversion run failed, Caldwell led 6-0 with 10:06 left in the third quarter.

Berne Union quickly responded as Sammy Amnah took the kickoff at the 25 and returned it 15 yards to the 40-yard line.

Three plays later, QB Nate Nemeth hit Friesner with a 43-yard touchdown pass. The extra point kick hit the crossbar and bounced away, but the Rockets had tied the game at 6-6 with 8:15 left in the period.

The Rockets forced the Redskins to punt on their next possession, but the Redskins’ defense stopped the Rockets and forced them into a fourth-and- three at the 31 where TJ Wehr stopped Chris Prince for no gain and Caldwell took over on downs.

This time, it took the ‘Skins seven plays to punch the ball into the end zone. The drive was highlighted by a fake punt where the ball was snapped to the up man, Brandon Piskula, who scampered eight yards for a first down.

On the next play, Caden Moore ran for 34 yards to the 20 and then, three plays later, Dudley scored his second touchdown of the third quarter by punching it in from five yards out as time expired. The point-after pass failed, so the Redskins finished the quarter leading by 12-6.

Berne Union fell on the onside kick-off at the 41 and from there, it took just five plays to get the ball into the end zone on a 37-yard run by Nemeth. The other big play of the drive was a 15-yard run by Ian Staten.

Hurst put the ball through the uprights on the extra-point kick and the Rockets took a 13-12 lead with 10:08 left in the game.

The Redskins could not get anything going on their next drive, stalling at their 45-yard line and the Rockets took over with a chance to run out the clock.

The Caldwell defense again stepped up, however, and Berne Union faced third down and three yards to go on the 31 when Sayre dropped Prince in the backfield for a six-yard loss, making it fourth-and-12 at the 37.

The Rockets attempted to punt, but bobbled the snap and Dawlson Moore tackled punter Garrett Moore at the 50 to give the Redskins the ball with just over three minutes left in the game.

After gaining a first down on two runs by Sayre, the Redskins found themselves with a fourth-and-five at the 35 with 1:26 left in the game. Dudley scampered 13 yards to give Caldwell a first down at the 22 and, after a short run by Piskula, Dudley had two runs to give the ‘Skins a first down from the 11 with 33 seconds left.

Dudley took the snap and scampered around the left side and went out of bounds at the six to stop the clock with just 18 ticks left. Moore then bulled up the middle for a six-yard touchdown with just 12 seconds left. The point-after run was no good and the Redskins took the lead, 18-13.

Following the score, Wehr kicked the ball short and Berne Union fell on it at the 40. Wehr again stepped up on defense and dropped the Rocket runner for a five-yard loss. An offside penalty on the Redskins set up a second-and-10 at the 44-yard line with three seconds to go. Nemeth attempted the long pass to Friesner, but it was dropped and Caldwell earned its 18-13 victory.

“Offensive and defensive lines really won this one for us,” said Coach Gaydos. “It’s a big-time win. It is going to be big for us for the playoffs. We could possibly get a first round bye or host a playoff game now, so it sets us up perfectly.”

Caldwell gained a total of 304 yards, including 268 on the ground and 36 through the air. Dudley was the workhorse for the night, carrying the ball 21 times for 74 yards and three touchdowns and tossing three completions in nine attempts for 36 yards with one interception.

Parks was the leading receiver with two grabs for 30 yards, the longest a 27-yarder. Sayre had 14 carries for 82 yards while Caden Moore had 12 for 76 yards. Piskula ran nine times for 36 yards and caught one pass for six yards.

Defensively, the Redskins were led by Dawlson Moore with nine tackles (two for a loss) and Wehr had six (three for a loss). In total, the CHS defense had eight tackles for a loss.

Berne Union had 140 total yards, with 54 passing and 71 rushing. Nemeth was 3-of-6 for 54 yards with one touchdown and one interception. His favorite receiver was Friesner with two catches for 53 yards. Colt McCormick ran for 33 yards on four carries.

The win brings the Redskins’ record to 3-2 and vaulted them to the second position in the unofficial Division VII, Region 27 rankings. Seeding voting for the playoff will occur this week to determine who Caldwell will face in its first-round OHSAA playoff game.