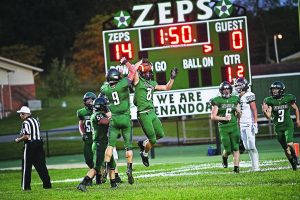 Shenandoah  High turned a close game into a runaway with four unanswered scores in the second half to earn a much-needed 44-19 victory over Johnstown Northridge to give the Zeps a Homecoming victory on Friday.

Leading by a narrow 16-11 margin at the half, Coach Jesse Wells’ squad tallied four times over a 10-minute span of the third and fourth quarters to collect its third win in five outings.

“Obviously winning games on Senior Night and Homecoming are always important for school pride and it’s special for the kids,” said Coach Wells. “We went in thinking this could possibly be the last home game for our seniors, although we hope it’s not, so we wanted to get this win.”

Shenandoah finished with 463 yards, including 297 passing and 166 rushing.

Senior quarterback Dayton Hill completed 16-of-23 for 276 yards with four TDs and three “picks” while senior back Briar Portman connected on his only toss for 21 yards.

Versatile senior Cade Denius turned a combination of catch-and-runs and shovel passes into a “monster” night with 14 receptions for 234 yards and four total TDs, with the yardage total eclipsing the previous school record of 201 yards by Wes Rataiczak in 2008 and the 14 catches tying Tom Perkins’ record from 1990.

“Dayton at times looked really good,” said Wells, “and Cade showed what he’s all about. Our injuries are mounting up and he’s stepped up and said ‘give me the ball’…he’s one of those kids who will show up no matter what and give everything he’s got.”

Portman carried 24 times for 83 yards, caught a 40-yard TD pass and returned a fumble 19 yards for a score while sophomore back Tyce DeVolld had four rushes for 43 yards and caught two passes for 31 before leaving with an injury. Portman now has 467 yards rushing and eight total TDs through five weeks.

“Briar had a nice game and ran hard,” said Wells. “It’s hard when all 11 guys are coming after you on every play.”

The teams traded turnovers early, with junior Nic Minder intercepting a pass for the Vikings and senior Baylor Wentworth coming up with a fumble recovery for the Zeps.

Shenandoah turned that takeaway into the game’s first score, embarking on a 90-yard drive which featured four completions by Hill – 15 yards to DeVolld, 15 and 24 yards to Denius and the final 40 on a swing pass to Portman who raced to the end zone.

DeVolld ran for the two-point conversion to give the Zeps an 8-0 lead with 4:06 on the first quarter clock.

A squib kick-off by the Zeps was covered by Wentworth, but the hosts failed to capitalized when a fourth-and-one play was stuffed by the Northridge defense.

The Zeps’ defense delivered at that point, however, with sophomore Hunter Schott stripping the Northridge ballcarrier and Portman racing 19 yards to paydirt.

Hill teamed with DeVolld for the bonus markers and Shenandoah was on top, 16-0, with 1:50 remaining in round one.

Northridge cut the lead in half with a 10-play, 59-yard drive which culminated in a one-yard TD run by junior back JD Miller. Sophomore QB Carl Ferguson ran a sneak for the extra two points, pulling the Vikings within 16-8 at the 8:47 mark of the second period.

Northridge junior Dalton Hildebrand came up with an interception to give the visitors possession at midfield.

A 20-yard run by sophomore Lane Hess got things started and the Vikings’ ground game got two more first downs to set up a first-and-goal at the nine, but the rushes resulted in net one-yard loss and forced the Vikings to try a field goal, with junior Connor Everts drilling a 27-yarder to pull Northridge within 16-11 with 3:55 left in the first half.

Shenandoah moved from its 46 to the Northridge 15 in the waning moments of the half, but a fourth-down pass was picked off in the end zone on the final play.

A 35-yard gainer by DeVolld had the Zeps knocking at the door early in the third quarter, but four plays from the 11 went nowhere and the Vikings took over.

After gaining one first down, Northridge had to punt and a 17-yard shank set the Zeps up at the 43-yard line.

A 26-yard Hill-to-Denius connection got the ball to the Vikings’ 18 and after a two-yard Portman run, Hill and Denius teamed up again, this time for a 14-yard score.

DeVolld added the conversion run and the Zeps had some breathing room with a 22-11 lead with 4:52 left in the third quarter.

Things continued to go Shenandoah’s way on its next series which covered 60 yards in six snaps, with DeVolld getting 12 on the first play; Portman churning for 42 on the next five and Denius taking it the final yard for “six”.

Portman added the two-pointer to push the Zeps’ lead to 30-11 with 23 seconds left in the third chapter.

Another “pooch” kick by the Zeps wasn’t handled and SHS freshman Weston Miley pounced on the ball at the Northridge 40.

A 21-yard pass by Portman to Denius and a personal foul against Northridge set up a first-and-goal at the eight. Three plays later Hill and Denius connected for another TD and Portman ran in the conversion to widen the gap to 38-11 with 10:20 remaining in the game.

A “pick” by freshman Sam Townsend set the stage for Shenandoah’s final score, a 65-yard play which saw Hill elude several onrushing defenders and somehow flip the ball forward to Denius who then raced 65 yard to the end zone.

Behind six straight Miller runs, including gains of 14, 16 and 21 yards, Northridge got the game’s final score when Miller ran in from five yards out and Ferguson added the bonus markers with 3:32 remaining.

Coach Wells credited Northridge for being much better than a 1-4 football team, but said his team adjusted nicely in the second half.

“They’re young football team with difficult scheme to defend,” he said, referring to the Vikings’ wing-T attack. “I felt our kids handled everything they threw at us.

“We feel like we’ve been able to use the 10-minute halftime effectively,” said Wells, “so that we can give our kids the best chance to win.”

The Zeps, who tallied 21 first downs, were just shy of 100 yards in penalties with 10 infractions for 98 yards.

Prior to the game, Emma McAuley was crowned the Shenandoah Homecoming Queen for 2020.

The Zeps close out the six-game regular season/pre-OHSAA playoff action Friday against Buckeye Local, with kickoff a Yorkville Memorial Stadium set for 7 p.m. The Panthers are coming off of their first win of the season, a 32-14 victory against Monroe Central. Buckeye Local’s losses were to Barnesville (35-0), Union Local (19-6), Toronto (27-20) and Indian Creek (30-8).