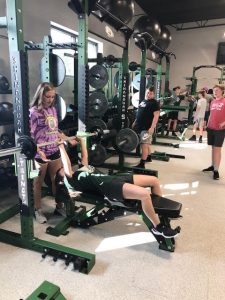 While it’s a pretty sure bet that Thomas Jefferson never had the pleasure of “pumping iron”, the words he spoke more than 200 years ago still stand true.

Thanks to a state-of-the-art Fitness Center unveiled at the start of the 2020-21 school year, the students at Shenandoah High School will have a greater opportunity to sharpen their skills.

With the growing popularity of taking a weight training class (nearly 170 of the 295 high school students elected the course this year), it became evident that the demand had outgrown “The Hall” – Shenandoah’s long-standing multi-purpose facility that housed the football locker rooms, wrestling practice mats and weightlifting area.

“We’ve had weightlifting class here (at SHS) since I was in school in the early 2000s,” said Jesse Wells, the physical education teacher as well as the Zeps’ head football and wrestling coach, “but weightlifting now looks a whole lot different than it was then.

“There are a lot of schools that have some type of fitness or weightlifting class,” he noted, “but we’re trending toward 75 percent of the student body taking this class.

“Steve and Becky Hall donated ‘The Hall’ to us back in the late ‘90s and we are very fortunate to have that building,” Wells continued. “When I started out, we had five weightlifting racks and it grew to 13 over there, and we’ve utilized that place like crazy, but we’ve just outgrown the building.”

Lifting weights has become about much more than just strengthening the football program, according to Coach Wells.

“One of the misconceptions from the community is any time they hear ‘weight room’ is that it’s for the football team,” he pointed out, “but in reality, for every kid in every sport it’s become a priority and it’s showing up with the success our teams are having and the individual accolades our athletes are getting.

“We have kids who are ‘farm kids’ who want to be stronger taking part,” Wells added. “There are so many positives that come from lifting including emotional self-confidence and body image…the benefits are immense.”

“The reality is that all athletes lift and many non-athletes also have a focus on health and wellness,” said Leffingwell. “We have more students who take the fitness courses at the high school than any other elective course we have, so we felt that we needed to upgrade that space. This allows kids to take fitness during the school day which means we don’t have kids lifting weights before or after school, and it also opened up space in ‘The Hall’ for our wrestling program which has increased its numbers greatly.

“It was also important to have a facility located adjacent to the school so our girls would have the same access to a locker room,” Leffingwell added. “In previous years, the girls had to dress (for fitness class) inside the high school and walk across the parking lot to ‘The Hall’, so this is a much better situation.”

Athletic Director Eric Sholtis and SHS Principal Justin Denius were also quick to point out the benefits of the new facility.

“If you look at how colleges build their programs, they get kids to come there by having them look at the facilities,” said Sholtis, “and while we’re not trying to recruit kids from other places, we want to recruit the kids within our building and get them involved in athletics. By having a facility like that, it’s the lynchpin to get them to want to be involved because of the ‘wow’ factor.

“Once they are there,” added Sholtis, “they find out they enjoy lifting and exercising because in the big picture, it’s not just about athletics…it’s about being healthy.”

“Jesse will have somewhere around 165 to 170 students which is approaching 75 percent of our population and obviously not all of them play football,” said Denius. “We have kids from all walks of life who want to be healthier and they take that class to get in shape.

“The kids are almost awestruck that we have something that nice here at Shenandoah,” added Denius, “and they are eternally grateful and loving every minute of it.”

Just how good is the facility?

“This new facility is literally the best around,” Coach Wells said proudly. “You might find a bigger one, but as far as quality it’s got to be one of the best in Ohio. We have 10 racks that are spaced properly and it’s a lot safer, and we’re really lucky and excited to have this facility.”

“I’ve coached at two other high schools and two different colleges,” said AD Sholtis, “and our facility is better overall than any of those. The new flooring alone is huge because it’s much safer compared to rubber mats. It’s quieter and eliminates some of the bounce when weights hit the ground, too.

“It’s vastly different compared to when I went to school here,” offered Principal Denius. “We literally lifted out of a closet. We had to bring things out every day into the gym and put them back when we were done.”

“After taking Cade (his son, a senior three-sport athlete) on a college visit to Otterbein University,” he said, “it showed that we truly have a fitness center and weight room that is comparable to a Division III college at a minimum.”

Not surprisingly, students from seniors to freshmen are impressed with their new “digs”, too.

“Compared to what we had, this is awesome,” said senior Wyatt Miley. “You won’t find another weight room like this around.

“No matter what skill set you are, you can always come in here and work to get better,” he added.

“I love it,” offered freshman multi-sport athlete Mya Leach. “It’s going to be a huge advantage for everyone.

“It helps us not only get stronger physically,” she added, “but it’s a big help mentally to be able to accomplish things in here, too.”

Injury prevention is another plus of the upgraded facility.

“By having this facility, we should be able to keep our athletes healthier and help prevent injuries by building strength and flexibility in a mobile athlete,” said Superintendent Leffingwell. “Bigger, faster, stronger athletes perform better on the field, but the ability to prevent and/or rehab from injury is just as critical.”

The Fitness Center (including the restrooms) measures nearly 5,000 square feet. Energy Optimizers, USA (Dayton) served as the general contractor working with 3D Construction (Parkersburg) and Davis, Pickering & Company, Inc. (Marietta), with the equipment purchased from Dynamic Fitness & Strength based in Eau Claire, Wisconsin. The project took five months to complete and was ready to roll on the first day of school (Sept. 8).

“Dynamic Fitness is a fantastic company…I can’t say enough about their work,” said Leffingwell. “They came highly recommended and as we were shopping around, we were able to see the quality of their products at various places we visited and their equipment not only serves our needs, but it’s going to last.”

Early in the year, the students in the fitness classes underwent baseline testing in four core lifts – bench, squad, push press and hang clean – to see what they can do as far as their strength and technique. After nine weeks or workouts, they’ll be tested again to see their progress before finally being tested at the end of the semester in December for final results.

Coach Wells says it’s inevitable that everyone will improve, but to what degree depends on the individual.

“It depends on how hard they work,” he said. “An advanced weight lifter won’t grow as much as someone who’s never lifted…those kids will have a larger growth percentage and they won’t only get stronger, but they will learn proper techniques.

“Most of the kids genuinely love weightlifting,” he said, “and they want to work to get better.”

Not to be overlooked is the addition of indoor restroom facilities for spectators attending events at the stadium, eliminating the need for the dreaded port-a-johns.

“I would say for the average spectator that comes to a football game, that’s bigger than the actual weight room,” Sholtis admitted. “They now have a restroom where they don’t have to go to the back of the school or use a portable toilet.”

Not surprisingly, keeping the facility in tip-top shape is a priority.

“Having ‘Zep Strong’ emblazoned everywhere gives it a real pride aspect,” said Sholtis, referring to every piece of green and black equipment. “The bumper plates, bars and racks all have logos on them, so the branding creates a sense of pride so that the kids have an added reason to take care of things.”

“We want to keep everything nice, no doubt,” echoed Wells. “We didn’t spend all of this money to destroy it and our thought is that there is a right way to lift and a right way to take care of what we have and take pride in it.”