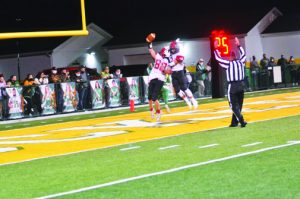 The Caldwell Redskins traveled to Conotton Valley on Friday and the Redskins returned home with their fourth win of the season, a 34-8 conquest of the Rockets.

“We played well tonight,” said Caldwell head coach Grant Gaydos. “We came out and stuck it to them early.

“They started the game on a really good drive, and we had to tighten up things defensively.” he continued. “We were able to get a couple plays for negative yardage and that really got us going.”

The Rockets started the game driving the ball into the “red zone” on a 13-yard run by Ben Mauge before Braxton Dudley intercepted an Evan Rice pass at the one-yard line and took it out the Rocket 49.

It only took Caldwell four plays to score as they came out firing the ball through the air, throwing three times on the drive. Whyatt Parks caught two of the Dudley tosses, first for 13 yards and then for 25 yards and the touchdown. Caden Moore chipped in an 11-yard run in the drive.

Marshal Sayre bulled his way in for the extra points, and Caldwell led 8-0 with 6:01 left in the first quarter.

Caldwell’s defense stepped up again in the Rockets’ next drive, with the Sayre recovering a fumble on the Conotton Valley 22.

This time, it just took two plays to score – a seven-yard run by Caden Moore and a 15-yard touchdown grab by Whyatt Parks from Dudley. The point-after pass failed and the Redskins led 14-0 with 3:22 left in the first period.

The Redskins’ defense held the Rockets again and forced a punt with Caldwell started this drive on its 37.

It took 10 plays to drive the ball into the end zone on a Caden Moore three-yard run. The drive was highlighted by a 24-yard run by Dudley. The two-point conversion pass failed, but the Redskins led 20-0 with 8:50 left in the half.

After the teams exchanged punts, the Rockets drove the ball to the Caldwell 32 with time running out in the half. Rice completed a 25-yard pass to Rocco Romeo at the seven, but time ran out and the Redskins took a 20-0 lead into the locker room.

The teams again exchanged possessions to start the second half before Caldwell put together a 12-play drive with Caden Moore again getting the touchdown, this time on a six-yard run. Sayre had two big runs in the drive for 18 and 21 yards and Dudley also hit Whyatt Parks with a 15-yard pass. Caden Moore ran in the extra points and the ‘Skins led 28-0 with 1:52 left in the third quarter.

The Rockets returned the ensuing kickoff 15 yards to the 35, then fumbled the ball on the first play, with TJ Wehr recovering it on the 32.

After a penalty moved the ball to the 45 and an incomplete pass, Dudley hit a wide-open Dawlson Moore for a 45-yard touchdown. The extra point kick was no good and Caldwell led 34-0 with 48 seconds left in the third period.

The teams again exchanged punts before Conotton Valley took over on it 30.

It took just four plays for the Rockets to score, with Rice throwing four straight completed passes, including a 25-yard touchdown strike to Garson Imes. Rice ran in the two-point conversion and the Rockets trailed 34-8 with 6:37 to play.

Conotton Valley held Caldwell on the next possession and forced a punt, with the Rockets taking over on their 35.

Rice had runs of 11, 22 and 13 yards as the Rockets drove the ball to the Redskins three-yard line. The Caldwell defense again stepped up, however, when freshman Hunter Parks ripped the ball from Rice just before he got into the end zone, ending the last Rocket threat of the night with just under three minutes to play and sealing the victory for the Redskins.

“We are trying to open things up a little bit,” said Coach Gaydos. “We have the potential to do it. We have a quarterback that can throw, a line that can protect, and receivers that can catch. We showed that a few times tonight.”

Caldwell had 336 yards, including 181 yards rushing and 134 yards passing. Dudley was 7-of-11, completing six passes to Whyatt Parks for 89 yards and one to Dawlson Moore for 45 yards and the touchdown. Dudley led the running attack with 12 carries for 80 yards while Caden Moore had 10 totes for 53 yards and Sayre had 7 for 52 yards.

For the defense, Dawlson Moore had eight tackles and Caden Moore had six. The Redskins had an interception by Dudley and forced three fumbles recovered by Sayre, Wehr, and Hunter Parks.

Conotton Valley outgained the Redskins with 366 total yards – 104 on the ground and 216 through the air. Rice completed 14-of-22 passes with one touchdown and one interception. He also led the ground attack with nine carries for 51 yards. Mauge had eight carries for 29 yards. The leading receiver was Romeo with four catches for 39 yards while Imes had a 25-yard touchdown catch.

“We still have a lot of things to improve on, but we are ready for the playoffs.” said Coach Gaydos.

The Redskins (4-2) are the sixth seed in Division VII, Region 27 and will have a bye for the first round of the OHSAA playoffs. They will host the winner of the Reedsville Eastern-Portsmouth Sciotoville game on Friday, October 16 at 7 p.m. at the Noble County Fairgrounds.