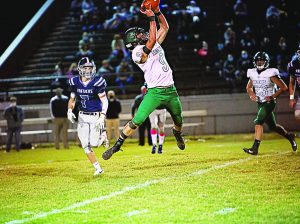 Playing short-handed due to a recent rash of injuries, Shenandoah High had to overcome more than a few in-game calls that didn’t go its way, but when the game finally ended, the Zeps emerged with a 16-8 overtime victory against Buckeye Local at World War II Memorial Stadium on Friday.

Coach Jesse Wells’ Zeps, who improved to 4-2 heading into the OHSAA playoffs, got the ball first in OT, picking up a first down on three straight runs by senior back Briar Portman – an all-Ohio first team selection last year – and then on third-and-goal from the nine, senior QB Dayton Hill found Portman across the middle for the go-ahead TD.

Hill then scrambled and dove into the end zone for the two-point conversion, giving Shenandoah a 16-8 upper hand.

Buckeye Local’s possession in the OT fizzled with a fumbled snap, a sack and an incomplete pass, but the Panthers stayed alive when the Zeps were called for pass interference on fourth down at the SHS 24-yard line.

The ball advanced half-the-distance to the 12, but the fourth-and-two play resulted in a fumbled exchange to end the game.

“Over the long haul, we’ve historically not been good in overtime so it was great to see our kids respond,” said Coach Wells. “With everything that happened, it was hard to keep their emotions in check, but we continued to play hard and answer the bell.”

At the outset, Shenandoah forced a Buckeye Local punt and embarked on its only scoring march until overtime.

Portman had a pair of 26-yard runs and he got the six-pointer on a four-yard run from the “wildcat” formation, and when senior Cade Denius took direct snap for the two-point conversion, the visitors were on top, 8-0, with 5:33 remaining in the first quarter.

Buckeye Local evened the score midway through the second period after gaining possession at the Shenandoah 47 following a punt.

Four runs by sophomore back Trey Hoover pushed the ball to the 34 where senior QB Hayden Taylor hit his favorite target – junior Brian Palmer, Jr. – on a stop-and-go pass for 32 yards to the two.

Hoover got the call from there and plowed in for the TD, and he added the tying two-pointer in similar fashion to forge an 8-8 deadlock with 6:23 left in the second quarter.

Shenandoah’s Portman blocked a punt with less than three minutes left in the half, but the Zeps gave it right back on a fumble covered by senior Austin Langford of the Panthers.

Buckeye Local (1-4) got a break when a hook-and-lateral play was blown dead before an apparent fumbled pitch (had the play been ruled the other way, the Zeps would have scored with the recovery). The Panthers came up short four plays later, however, as Ethan Carpenter of the Zeps intercepted a pass to the end zone to end the half.

A Buckeye Local fumble was pounced on by Shenandoah’s Julius Kirk in the waning seconds of the third quarter, and the Zeps appeared to have another turnover with 5:40 remaining in regulation when Portman had what appeared to be a strip-sack-fumble recovery at the Panthers’ 28, but again the play was whistled dead and BL retained the ball.

Shenandoah’s Denius picked off a Panther pass with 33 seconds to go and it almost proved fatal.

Two plays later, Zeps’ QB Hill tossed a screen pass to Denius who was off to the races for what would have been a game-winning 79-yard TD, but an illegal block at the 13-yard line negated the score, leaving just three seconds on the clock where an incomplete pass from the 28 sent the game to OT.

“We struggled up front at times,” said Wells. “They were big and physical and we’ve had to shuffle some guys around to solidify things there.”

“We knew their quarterback was solid and they had a good receiver,” said Wells, “but we’re so banged up and playing some young kids in the secondary, they took advantage of that early. Our plan was to take 10 (Hoover) away, and we did a solid job there.”

“We thought they would try to do that (take away Hoover),” said Buckeye Local’s Herbert, “but I thought we moved the ball around to some other places and our defense played lights out…we just couldn’t punch it into the end zone.”

OHSAA playoff action begins this week, but Shenandoah – which was voted the No. 7 seed by the coaches in Division VI, Region 23 – will have a bye before hosting the winner of the Coal Grove Dawson-Bryant/Grandview Heights game on Saturday, Oct. 17 at 7 p.m.

“We definitely need the bye week,” said Wells. “I think we’ll be seeing Coal Grove in two weeks and we know a little about them since we played them in 2017.”

Wells referred to the Zeps’ playoff game against Coal Grove Dawson-Bryant which resulted in a heart-breaking 7-6 loss.