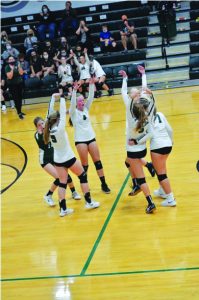 The Shenandoah Lady Zeps earned a return trip to the OVAC Volleyball Tournament thanks to a pair of big victories last week, with Coach Megan Grywalski’s squad defeating Wheeling Central on Tuesday and then sweeping past Fort Frye on Thursday.

A 25-23, 25-20, 25-13 win over Fort Frye nearly elevated the Lady Zeps (9-10) to second in the OVAC Class 2A standings, but Wheeling Central (12-7) held on by the narrowest of margins. That means Shenandoah plays at Wheeling Central on Tuesday (JV action at 5:30 p.m.) in one semifinal match while top-seeded Shadyside (16-2) hosts fourth-seeded Frontier (10-7) in the other. The winners then play Saturday at 1:30 p.m. in the championship match at Union Local High School.

“We’ve been working a lot on our hitting and blocking and we were so solid today,” said Coach Grywalski. “We really looked like a team tonight.”

Shenandoah has defeated Wheeling Central twice, but Grywalski & Co. can expect a battle on Tuesday.

“They have improved and were a lot tougher the second time,” the SHS coach said of the Lady Maroon Knights, “but if we play like we did tonight, I think we’ll be OK,” the Lady Zeps’ coach said.

Against Fort Frye (16-3) – the No. 1 seed for the OVAC Class 3A Tournament – the Lady Zeps spread the wealth at the net, with freshman Mya Leach and sophomore Charli Wickham both collecting eight kills; Freshman Brylee May and  sophomore Laney Hitchens each notching seven and sophomore Tara Pakes adding five. Junior Ryleigh Sherman was again solid as the setter with 31 assists.

Leach and sophomore MaKenna Clift both tallied 10 serving points (three aces) while Pakes and Wickham both had six.

Clift recorded 15 digs followed by Wickham with 12, Leach with nine and Sherman with seven, and Leach was charted with three blocks.

“It was an ugly win, but still an important one for us,” said Coach Megan Grywalski. “We put ourselves in those close game situations by making our own mistakes and not making Central earn their points.

“My hitters are struggling to make adjustments around a solid block,” she added.

Strong net play included 15 kills by Mya Leach, 14 by Brylee May and 13 by Tarak Pakes. Ryleigh Sherman was charted with 50 assists.

Sherman also led in service points with 18 (nine aces) while MaKenna Clift tallied 12 (one ace) and Leach had 11 (six aces).

Defensively, Clift and Leach both had 18 digs; Charli Wickham had 13; Sherman had nine and Grace Wikander had seven. Leach was charted with three blocks.