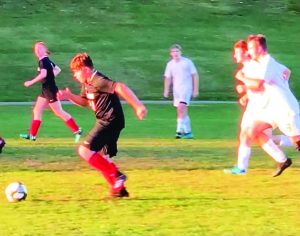 Caldwell High soccer team hosted Parkersburg Catholic on Thursday, with the Redskins earning an 8-2 victory, but it was a match about much more than the final score.

“Tonight wasn’t about the score or how well we played or who scored,” said Caldwell coach Michael Ontko. “Tonight was about sportsmanship and how family is more important than the result.

In a show of sportsmanship, Caldwell freshman Jason Fleeman got onto the pitch and scored his first goal his career late in second half.

“Hats off to Parkersburg Catholic for teaching their kids what is important in life while the world seem to be only focused on hate,” offered Ontko. “Tonight, our team grew into a family and I’m very proud of our players led by Skylar Roets for what he asked to do tonight.”

Caldwell scored four first half goals to lead 4-0. The Redskins got two more goals in the second half before allowing the Crusaders to score, and Caldwell tallied twice more while Parkersburg Catholic scored one for the final 8-2 margin.

Nathaniel Marks and Parker Glodowski each scored an unassisted goal for the Crusaders.

Caldwell traveled to Cadiz to face Harrison Central on Tuesday, with the Huskies earning a 3-2 victory.

“This one was a tough one to lose,” said Coach Ontko.  “We won the possession contest…we played aggressively…we played well individually and played well as a team.

“We just made a mistake in the box and they were awarded a PK and their go-ahead goal was a deflection off our defender’s foot.” he continued. “Nothing you could have done about that. This was another 4A team that this program was able to compete with and could have won.  These players should be proud of what they are accomplishing this year.”

Phillip Kowalsky and Mas each had a goal for the Redskins. Goalkeeper Clark had seven saves.

Ben Puskarich had two goals and Kaden Jurosko had one for the Huskies. ‘Keeper Mack Marshal had one save.

Up next for the Redskins (7-7) are a trip to South Zanesville to face Maysville on Monday and a visit from Magnolia on Wednesday.