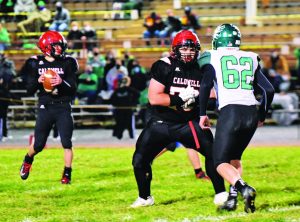 The sixth-seeded Caldwell Redskins hosted the 11th-seeeded Eastern Eagles in an OHSAA Division VII, Region 27 playoff game on Friday and the Eagles pulled off the upset, beating the Redskins by a 26-14 score at the Noble County Fairgrounds.

Caldwell Head Coach Grant Gaydos was understandably disappointed in his team’s performance, having defeated Eastern by a 34-20 score in the season opener.

“We picked a heck of a week to play our worst game of the season,” he said. “They always say it is hard to beat someone twice, and I don’t know if we thought we just needed to show up to win.

“We knew they were a tough football team although we beat them fairly handily the first time,” he added. “They just wanted it more than us.”

Caldwell started the game with a 16-yard kickoff return by Whyatt Parks to the 27-yard line. The Redskins had a couple big first down runs by Braxton Dudley to move the ball to the 43 before Eastern forced a fumble and recovered it on the 45.

Eastern had a 14-yard run by Colton Combs before Parks picked off a Brady Yonker pass in the end zone to give Caldwell the ball on the 20.

The ‘Skins couldn’t get anything going after the turnover and were forced to punt, giving the Eagles the ball on the 37, and it took just seven plays for Steve Fitzgerald to punch the ball into the end zone from one yard out. The big plays of the drive were a pass from Yonkers to Conner Ridenour for 12 yards and a Fitzgerald run for 17 yards that took the ball to the one.

The PAT kick by Will Oldaker was good and the Eagles led 7-0 with 1:14 left in the first quarter.

Caldwell fumbled again on its next possession, with Bryce Newland recovering the ball on the Redskins’ 24.

This time, it took Eastern six plays before Yonker scored a touchdown from the one-yard line. The highlight play was a Yonkers to Ridenour 19-yard pass to move the ball to the one. The extra-point kick was no good, and the Eagles led 13-0 with 9:33 left in the half.

“The early turnovers really hurt us,” Coach Gaydos stated. “It is hard to dig out of a hole like that.”

The Eastern defense again stepped up and forced the Redskins to punt and the Eaglesgot the ball back on the 47.

It took just three Fitzgerald runs or 10, 19 and 23 yards to get the ball into the end zone ,and Oldaker’s point-after kick was good as the Eagles extended their lead to 20-0 with 6:21 remaining in the second quarter.

Caldwell was not ready to give up and scored on an eight-play drive.

Dudley completed a first down pass to Parks for 10 yards before running the ball for 10, 13 and 12 yards. Dudley then hit Dawlson Moore in the end zone for a 10-yard touchdown.

TJ Wehr then lined up in the backfield and bulled his was in for the two-point conversion, cutting the Eagles’ lead to 20-8 with 1:32 left in the first half.

The Redskins’ defense got another turnover on the next Eagles’ drive when Marshal Sayre intercepted a Yonker pass on the 39.

Dudley completed a 20-yard pass to Skyler VanFossen, but with time running out in the half, the Eastern defense stepped up and the half ended with Caldwell unable to find paydirt.

Eastern did not take long to score coming out of halftime, with the Eagles again needing just three Fitzgerald runs of four, 32 and 21 yards to score. The point-after kick was no good and Eastern led 26-8 with 10:47 left in the third quarter.

Neither team could get much going on their next drives with both turning the ball over on downs.

Caldwell’s next drive stalled at its 37, so VanFossen went back to punt but instead passed the ball to a wide-open Parks for a first down at the 47. Dudley then completed a 25-yard pass to Brandon Piskula, but the drive stalled again and this time VanFossen punted the ball away.

Caldwell held Eastern on the next series, forcing the Eagles to punt.

Eastern drove the ball to the 30 on its next possession, and faced a fourth-and-two where Caden Moore and Dawlson Moore took down Fitzgerald for no gain to get the Redskins the ball back.

The ‘Skins attempted an on-side kick, but the Eagles pounced on the ball on the 37 and Yonker took a knee to end the game.

Caldwell gained 358 total yards,  including 169 passing and 134 rushing. Dudley was 11-of-22 for 159 yards, two touchdowns and an interception and VanFossen completed one pass for 10 yards. The leading receivers were Piskula with five grabs for 75 yards and a touchdown and Parks with 4 receptions for 54 yards. Dawlson Moore had a 10-yard touchdown catch.

Dudley led the rushing attack with 16 carries for 87 yards, followed by Sayre with seven totes for 31 yards. Parks had four returns for 48 yards.

The Redskins’ defense was led by Caden Moore and Dawlson Moore each with eight tackles. Parks and Sayre both had an interception.

Eastern gained 313 total yards, with 254 on the ground and 59 through the air. Fitzgerald was the workhorse for the Eagles, carrying the ball 29 times for 242 yards and three touchdowns. Yonker was 4-of-6 passing for 59 yards and two interceptions, with all four completions were to Ridenour.

Caldwell (4-3) is scheduled to host Waterford (4-4) in a regular season contest on Friday with a 7 p.m. kickoff. The Wildcats are coming off a 7-6 playoff loss to River in another Division VII, Region 23 game.