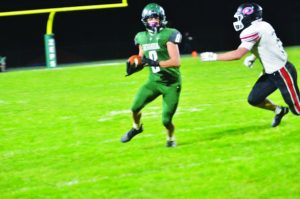 There was no mystery to what Coal Grove Dawson-Bryant’s game plan would be: run the ball; do it again and then do it again…and Shenandoah simply couldn’t stop it.

In a back-and-forth game that figured to come down to who had the football last, that’s exactly what happened as the visiting Hornets stung the Zeps with a game-winning touchdown with 17 seconds remaining to pull out a 41-38 thriller in the OHSAA Division VI, Region 23 playoffs on Saturday.

Coal Grove Dawson Bryant racked up a whopping 411 yards on 70 running plays and the game-winner in the waning seconds was scored by senior Austin Stapleton on a one-yard run. Stapleton, who entered the game with 700 yards, teamed with junior Malachi Wheeler for a formidable one-two punch.

Stapleton carried the ball 32 times for 235 yards and four touchdowns while Wheeler toted the leather 31 times for 156 yards and two scores to lift the Hornets (5-2) to victory.

Despite the tough loss that dropped the Zeps to 4-3, veteran coach Jesse Wells felt his team played well, but the Hornets just played a little better.

“Everything went pretty much according to plan,” said Wells. “We did the things we needed to do to stay in the game, but they just made more plays than us.

“We had the feeling all during the game that whoever had the ball last was going to win and that’s what happened,” he continued.

“I told our kids that when we lose because we don’t play good enough, that’s when I struggle with things but we played good enough to win,” Wells added. “Hats off to them because I know how hard it is to make that long of a trip. They played super hard and had some great players.”

Coal Grove scored on it opening series, a 10-play, 58-yard drive featuring alternating runs from Stapleton and Wheeler, with Stapleton getting his first TD on a one-yard run. Senior Morgan Schultz added the two-point conversion from a “muddle huddle” formation to give the Hornets an 8-0 lead at the 7:28 mark of the opening quarter.

The Hornets made it 15-0 with 11:20 remaining in the first half when Stapleton broke free for a 43-yard TD, with junior Justin Newcomb adding the point-after kick.

A nice kickoff return by senior Briar Portman set the Zeps up at the Hornets’ 34-yard line.

A big fourth-and-14 pass from senior QB Dayton Hill to classmate Baylor Wentworth covering 26 yards then set up an 11-yard shovel pass from Hill to senior Cade Denius for the first Shenandoah score of the night.

Hill added the two-point conversion by pushing across the goal line, pulling the Zeps within 15-8 with 9:03 on the second quarter clock.

Each team scored again before the intermission, Coal Grove on a five-yard TD run by Stapleton at the 5:34 mark and the Zeps responding with a bit of trickery on the ensuing kickoff, with Hill taking the kick and tossing a lateral pass across the field to Denius who then raced 75 yards to paydirt with 5:18 showing.

N either team’s two-point try was successful, so the Hornets took a 21-14 lead to the locker room.

Shenandoah got the ball to start the second half near midfield, and after several “chunk” plays – a 10-yard hill-to-Denius pass and runs of 16 yards by Portman, 10 by Hill and 11 by Denius, the payoff came on an 14-yard toss by Hill to Portman.

Big 285-pound junior Preston Mackie got the call on the two-point conversion, and he stumbled in to give the hosts a 22-21 lead with 9:25 remaining in the third round.

“We got a huge stop just before the half to keep it to a one-score game,” said Coach Wells, “and then we scored to start the third quarter, and then we just a battle of scoring.”

CGDB regained the lead with an 11-play, 65-yard drive that took nearly five minutes, highlighted by a 10-yard run from Wheeler on a fourth-and-five play. Wheeler also got the six-pointer on a four-yard run and although Stapleton was stopped short on the conversion, the Hornets were back on top, 27-22, at the 4:47 mark of the third chapter.

Once again, the Zeps responded, with Denius making a 44-yard kickoff return to get things started.

Portman had runs of 15 and 14 yards to set up a first-and-goal at the seven, but a holding penalty set the Zeps back to an eventual fourth-and-goal from the 13, but Hill connected with senior Tanner DeVolld for a TD and Mackie again ran in the bonus markers as SHS regained the lead, 30-27, with 1:21 to play in the third.

The Hornets got the lead yet again with an eight-play, 70-yard drive featuring a 47-yard scamper by Stapleton to the six where Wheeler ran in for the TD. Stapleton added the two-point conversion, and CGDB was up, 35-30, with 9:27 remaining in the game.

Shenandoah took what would be its last lead of the night with 6:02 remaining when the Zeps, facing a fourth-and-inches at the four, gave the ball once again to Mackie and he found paydirt.

A delay-of-game penalty set the Zeps back on the extra-point try, but Hill teamed with Cool and the Zeps led, 38-35.

That set the stage for the Hornets’ game-winning drive which covered 59 yards, including a fourth-and-six conversion when Schultz ran a counter for 15 yards to the 16. A 10-yard run by Wheeler got the visitors down to the three and then two runs by Stapleton got the ball into the end zone.

While Coal Grove’s offensive output was entirely on the ground (QB Clay Ferguson was 0-for-2), Shenandoah had 137 rushing and 81 passing for a total offense of 218. Portman carried 11 times for 84 yards and Hill added 49 yards on eight rushes, and Hill was 8-of-14 passing with three TDs and an interception on the game’s final play.

Coal Grove advances in Division VI, Region 23 and will host Loudonville, which upset second-seeded Centerburg in another high-scoring affair (42-41), on Friday. When or if Shenandoah resumes regular season play this week was not yet determined at press time.