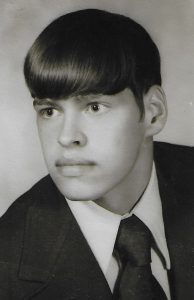 Donald F. Nau, age 64, of Caldwell, Ohio, died Thursday, October 29, 2020, at Summit Acres Nursing Home in Caldwell. He was born April 16, 1956, in Zanesville, son of Richard Urban and Gertrude Emma Nauer Nau of Caldwell. Don was a 1974 graduate of Caldwell High School. He was employed as manager of the meat department at Gateway IGA and was self-employed as a meat processor. He was also employed by Crock Construction and as a farm hand for the Crock family. He was a member of the St. Mary of the Immaculate Conception Catholic Church in Fulda and he was the caretaker for the St. Mary Parish Cemetery for many years.  He was a member of the Caldwell Moose Lodge, #221. Don enjoyed all aspects of farming and he enjoyed life every day.

Friends may call Sunday, November 1, 2020, from 4-8 p.m. where a vigil service will conclude visitation at 8 p.m. Funeral Liturgy with Mass will be observed Monday, November 2 at 10 a.m. at St. Mary of the Immaculate Conception Catholic Church with Rev. Fr. Thomas Nau and Rev. Fr. Wayne Morris as celebrants. Burial will follow at St. Mary’s Parish Cemetery. Guests are asked to wear masks and practice social distancing at all gatherings. An online guestbook may be signed at www.mcvay-perkins.com