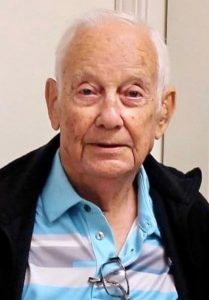 Billie C. Ball, age 91, of Caldwell, Ohio, died Thursday, October 29, 2020, at Summit Acres Nursing Home in Caldwell. He was born December 14, 1928, in Noble County, son of the late Ernest and May Swain Ball. Billie was a graduate of Dexter City High School. He enjoyed eating at Kathy’s Kitchen in Caldwell and he loved to play cards.

In addition to his parents, he is preceded in death by one son, Laurence Ball; three sisters, Nora Williams, Betty Huberty, and Bertha Clark; and four brothers, Floyd, Willard, Roy, and Robert Ball.

Surviving are his son, Stephen C. Ball of London, Ohio; his siblings, Junior (Marilyn) Ball of Canton, Charles Ball of Sarahsville, and Charlene Archibald of Caldwell; and many nieces, nephews, and cousins.

Inurnment will take place at South Olive Cemetery at a later time. McVay-Perkins Funeral Home, 416 East Street, Caldwell, is caring for the family. An online guestbook may be signed at www.mcvay-perkins.com