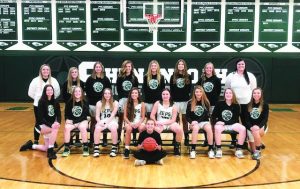 A year of uncertainty.

It’s 2020, so that’s not a big surprise, but it also aptly describes the Shenandoah Lady Zeps’ basketball team which is set to tip off the season later this week with one proven scorer, a bevy of promising freshmen and significant changes to the overall game plan.

Coach Sami Schott, set to begin her third season at the helm of her alma mater, returns just four letterwinners (one currently sidelined due to injury) but she’s very optimistic with a promising group of freshmen on hand.

“We’re pretty much young and brand new,” said Schott, whose team finished 13-11 overall last season and was an OVAC Class 2A Tournament semifinalist. “We are a completely different team, and we are looking at half of our girls being freshmen.

“This adds an element of surprise to our game this year,” she continued, “but it’s a very, very athletic and talented group so we’re looking at the younger players to step up and fill spots that are now vacant due to graduation and injury.”

Like everyone else, the Lady Zeps’ were limited over the summer by COVID-19 issues.

“Our off-season work was clearly limited,” said Schott, “however, the girls attended all of the athlete workouts and participated in skill work and we held a shooting camp with Sports City U in our gym that allowed us to get some time together and get up plenty of shots.”

With changing personnel, Schott & Co. will alter their style of play this winter.
“We are shifting our whole defense and offense to better suit our roster,” the Lady Zeps’ coach stated. ‘Losing a six-foot post player (Raegan Flood) has changed our defensive strategy because we no longer have her back there as our safety net.

“We are looking to quicken our tempo on both offense and defense,” Schott added, “and without much in the way of size, we’ll be in a situation where they might be against a guard one minute and down in the post the next.”

The “go-to” player on this year’s squad will be 5-5 senior guard Ashleigh Wheeler, a three-year letterwinner (the first two at Buckeye Trail before she transferred to Shenandoah last year).

“Wheels” tallied 17.8 points per game last season and she also led the team in steals (a school-record 124) and assists (92). Wheeler also set a school record with 16 steals in a game. She received special mention all-Ohio Division IV honors along with first team all-Eastern District Division IV, all-OVAC Class 2A and all-District 12 Division IV.

“Obviously, we will be looking to Ashleigh to lead us,” said Coach Schott. “She has stepped up her game which has been creating a positive domino effect with everyone else.

“By the time you get to your senior year,” the Lady Zeps coach continued, “teams know you and everyone know she’s a shooter and a driver, but we’ve worked on her pull-up mid-range game. She’s improved all-around, both physically and mentally.”

Two other senior veterans are 5-5 guard Mackenzie Lynch and 5-2 guard Kendall Mackie – both two-year letterwinners. Lynch was an all-District 12 honorable mention selection while Mackie will be sidelined until at least January recovering from a fractured foot she sustained during cross country season.

The fourth returning letterwinner is sophomore Charli Wickham, a 5-8 guard.

A trio of juniors on the squad are 5-7 guard Monica Seevers, 5-6 guard Karlee Wehr and 5-6 forward Kaylee Wehr while the only sophomore besides Wickham is 5-9 forward Casara Danaher.

Coach Schott will be assisted by Taylor Rossiter along with her mother, Jodi Schott, with Hannah Frederick and Brooklyn May leading the junior high program.

Shenandoah’s schedule has a few new faces this year.

“We have added some larger schools to strengthen our schedule,” said Schott, referring to two games with Cambridge and one each with Philo and Indian Valley, with Reedsville Eastern another new opponent on the schedule “We want to face some bigger teams now while we’re young to help us get the experience we need, but we wouldn’t have done that if I didn’t think we could handle it.”

The Lady Zeps launch the 2020-21 season Friday at Beallsville and visit Federal Hocking on Tuesday, Nov. 24. The home opener is slated on Saturday, Nov. 28 against Reedsville Eastern in an afternoon contest.