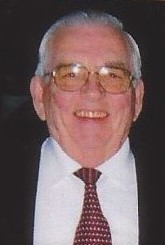 Donald W. “Donnie” Sanford, age 93, of Caldwell, Ohio, died Monday, November 30, 2020, at Altercare Summit Acres. He was born January 19, 1927, in Caldwell, son of the late Harry Beamer and Nettie Mae Watson Sanford. Donnie was a 1949 graduate of the Ohio School for the Deaf in Columbus, where he trained to be a linotype operator and where he was the quarterback on the varsity football team. On December 12, 1950, he was hired by The Journal Leader in Caldwell as linotype operator, where he was still working at the time of his passing. Donnie and Ruth were a team and did everything together. They hosted church services in their home for deaf people, who would travel from all around the area to attend those services. They participated in bowling leagues and volleyball leagues, and they loved to hunt, fish, and golf. Ruth was there when Donnie made his only hole-in-one at Wildfire Golf Club in New Concord at the age of 74 years old. Donnie and Ruth completely renovated their entire home, which once belonged to Donnie’s grandparents.

Friends may call Friday, December 4, 2020, from 1-5 p.m. at McVay-Perkins Funeral Home, 416 East Street, Caldwell, where the funeral service will be observed Saturday, December 5 at 11 a.m. with Ken Perkins officiating. Burial will follow at Olive Cemetery. Guests are required to wear face coverings and practice social distancing at all gatherings as required by the state of Ohio. Memorial contributions may be made to the Ohio School for the Deaf, 500 Morse Road, Columbus, Ohio, 43214, or to the CIC Happy Time Pool Fund, c/o Thomasina Crock, 9 Kennedy Drive, Caldwell, Ohio, 43724. An online guestbook may be signed at www.mcvay-perkins.com