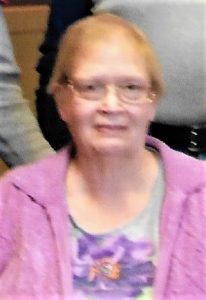 Jannie M. Hesson, age 74, of Caldwell, Ohio, died Tuesday, December 1, 2020, at Altercare Summit Acres. She was born February 26, 1946, in Noble County, daughter of the late William Carl and Betty Rose Walters Hesson. Jannie retired as a nurse’s aide from Marietta Memorial Hospital, where she was employed for 44 years. She loved cats and horses, and she enjoyed drawing.

In addition to her parents, she is preceded in death by her grandmother who raised her, Margaret Lillian Walters; and cousins, Ruth Nau, Terry Lantz, Denny Lantz, Jim Lantz, Charles Thompson and Pat Murphy.

A graveside service will take place at Lund Cemetery in Macksburg at a later time. Memorial contributions may be made to McVay-Perkins Funeral Home, 416 East Street, Caldwell, by visiting Jannie’s memorial page at www.mcvay-perkins.com. Friends are encouraged to leave memories, pictures, and messages of support in her online guestbook.