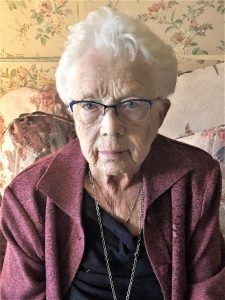 Betty J. Dunaway age 81, of Caldwell, Ohio passed away Wednesday December 2, 2020 at Genesis Hospital in Zanesville, Ohio. She was born March 31,1939 in Mt. Ephraim, Ohio a daughter of the late Rodney R. and Zola Neiswanger Williams.

She attended the Mt. Ephraim Elementary School, was a 1956 graduate of the Sarahsville High School, and went on to graduate from the Columbus Business University. She was a member of the Sarahsville Alumni Association and the Sarahsville Athletic “200” Club. She had been employed at The Farmers and Merchants Bank, The First National Bank and later retired after 23 years as an Administrative Assistant  from the Ohio Department of Transportation  in Washington County.

In addition to her parents, she is preceded in death by her husband Ohio State Trooper Dale Dunaway whom she married May 13,1982 and who passed on August 21, 1996, son Dwight Watson Jr. and her children’s father Dwight Watson.

Cremation will be observed with no additional services held at this time. The family is planning to have a celebration of Betty’s life at a later date. Chandler Funeral Home & Cremation Service, 609 West Street, Caldwell, OH 43724 has been entrusted to care for the family. In lieu of flowers memorial contributions may be directed in Betty’s honor to the Nationwide Children’s Hospital or to St. Jude Children’s Research Hospital. Please join us in remembering Betty by visiting her memorial at www.ChandlerFuneralHome.net