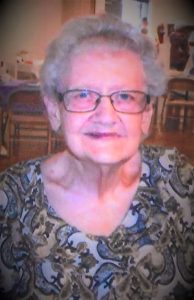 Betty L. Clark, age 94, of Hiramsburg, Ohio, died Saturday, December 12, 2020, at The Beckett House in New Concord. She was born September 4, 1926, in Zanesville, daughter of the late Charles M. and Lela J. Moore Stiers. Betty was a 1944 graduate of Belle Valley High School. She worked as a cook for Brookfield Rural School and was employed by Kresgees in Cambridge. She was a member of the Hiramsburg United Methodist Church, a member of the Belle Valley Mothers Club, for which she served as a room mother, and she was a Shenandoah High School band parent. Betty served as a poll worker for 25 years and was a Noble County Fair Board wife. Along with her dear friend Violet Tomcho, she helped take care of the Floral Hall at the Noble County Fairgrounds for over 20 years. She received a Best Display of Antiques Award at the first Soakum Festival, for which she was active for many years. Betty went on many trail rides and trips as a member of the Ohio Covered Wagon Association with her sister and brother-in-law, Mary Ruth and Paul Archer. She loved animals and adopted many strays. She took her rooster, Cock-a-Doo to a chicken fly-in at the Bob Evans Festival and was recognized in National Geographic magazine and on TV. She enjoyed collecting Fenton Glass shoes, having collected over 100 pieces, and she enjoyed collecting cardinals.  Betty was a beloved mother and homemaker.

In addition to her parents, she is preceded in death by her husband, Robert F. Clark, whom she married June 10, 1950, and who died March 30, 2008; one grandson, Joseph Ryan Clark; one great-granddaughter, Lacee L. Heddleson; and her brothers and sister-in-law, William and Louie Clark, Paul Archer, and Richard “Dick” Williams.

Friends may call Tuesday, December 15, 2020, from 3-7 p.m. at McVay-Perkins Funeral Home, 416 East Street, Caldwell, where the funeral service will follow visitation at 7 p.m. with Ken Perkins officiating. A graveside service will be observed Wednesday, December 16 at 11 a.m. at Halley’s Ridge Cemetery. Guests are required to wear face coverings and practice social distancing at all gatherings as required by the state of Ohio. Memorial contributions may be made to PAWS, Inc. Humane Society of Noble County at www.noblepawsinc.com. The family would like to thank the staff at The Beckett House for their loving care. An online guestbook may be signed at www.mcvay-perkins.com