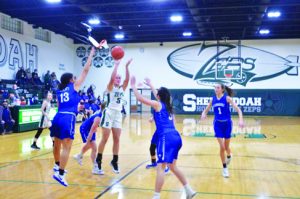 One up and one down during the week for the Shenandoah Lady Zeps, who defeated Cambridge and lost to Monroe Central in action on the home court.

On Monday, Shenandoah turned to its defense to earn a 30-26 victory over visiting Cambridge.

The Lady Zeps (3-1) led 9-6 after one quarter and maintained a three-point lead at the half, 19-16, before using a 9-4 edge in the third period to open a 28-20 advantage. Cambridge then outscored Shenandoah 6-2 over the final eight minutes, but the Zeps held on for the victory.

McKinzi Linscott and Braxton King each scored nine points for Cambridge (2-2) while Ziciah Gibson had six.

The Zeps had 12 field goals (no ‘threes’) and were 6-of-9 at the free throw line. SHS was charted with 19 rebounds, nine assists, six steals and 12 turnovers.

The Zeps rolled to a 41-8 win in the JV contest. Kinsley Brown tallied 10 points and Emmy McVicker scored eight for SHS.

On Thursday, the Lady Zeps trailed throughout in a 62-44 loss to Monroe Central.

The Lady Seminoles opened with a 17-10 first quarter lead behind 10 points from Kalista Friday and used a 16-14 edge in the second period to take a 33-24 halftime advantage. Trista Morris led the ‘Noles with seven tallies while Leach had a 10-point quarter for the Zeps.

Monroe Central put the game away with a19-10 edge in the third chapter, with Kynzi Bishop scoring eight as the visitors opened the lead to 52-34 and each team added 10 points in the final frame.

Friday led Monroe Central with 24 points followed by Morris with 13, Bishop with 12 and Grace Rainey with eight.

The Lady ‘Noles had 25 field goals including five “triples” and were 7-of-8 from the free throw line.

Leach topped the Zeps (3-2) with 14 points while also in double digits were Wheeler with 12 and May with 10. May also pulled down 11 rebounds for a “double-double” and Wheeler had seven assists and four steals.

SHS canned 18 field goals including six “treys” but made just 2-of-9 charity tosses. The Zeps had 29 rebounds and 18 turnovers.