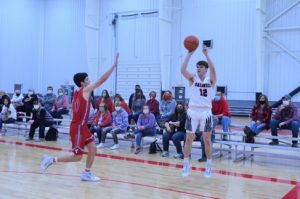 Caldwell’s Jett Lori puts up a three-pointer during Saturday’s game against Toronto. Lori tallied 31 points to lead the Redskins to their third win of the young season.

The Caldwell Redskins took on Toronto at the East Ohio Sports Complex, and the Redskins kept their perfect record intact, beating the Red Knights, 70-48, on Saturday.

“I thought we played hard the entire game.” Caldwell Coach Clint Crane stated. “We got better at attacking their zone defense as the game went on.

“We had great contributions from everyone tonight,” he continued. “We will be back to full strength for a big game on Tuesday and it should be an exciting game.”

The game started out close, with the Redskins holding a two-point lead at the end of the first period, 14-12.

The Caldwell offense took over in the second quarter, with the Redskins building their lead to 33-22 at the half.

Caldwell did not slow down after the break and built its lead to 49-35 at the end of the third stanza.

In the fourth quarter, Caldwell took the opportunity to rest some starters and cruised to the 22-point victory.

Caldwell was led by Jett Lori with 31 points and four rebounds, followed by Bede Lori with 26 tallies, five boards, and a block. Whyatt Parks was also in double figures with 11 points and had six steals. Lucas King had three assists.

Toronto was led by Brandt Reeves and Shane Keenan, both with 13 points.

The 3-0 Redskins will be in action on Tuesday when they visit cross-county rival Shenandoah. They will also host Monroe Central on Friday and Warren on Saturday.